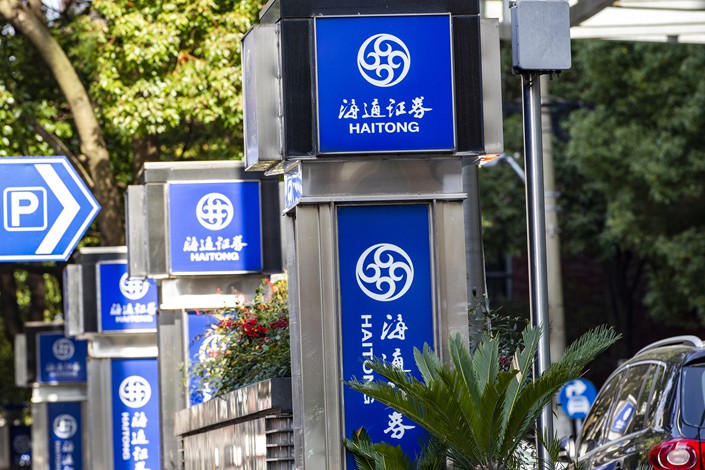 Haitong Securities has fined several of its senior staff for violating “the industry’s self-regulatory rules,” as well as company rules.

A month after a state-owned coal miner’s surprise default rattled the country’s bond market, the securities firm that allegedly helped it break the rules has announced it is punishing several executives following a regulatory probe.

Haitong Securities Co. Ltd. criticized and fined several of its senior staff for violating “the industry’s self-regulatory rules” and company rules, according to its statement (link in Chinese) published Saturday.

Last month, Haitong Securities and its subsidiaries were placed under a investigation by the National Association of Financial Market Institutional Investors (NAFMII), the self-regulatory body for the interbank bond market under China’s central bank, on suspicion of helping Yongcheng Coal and Electricity Holding Group Co. Ltd. illegally issue bonds and manipulating the market.

Haitong Securities’ punishment of executives signals that the whole firm was involved in illegal structured bond issuances, and that its internal risk management is insufficient, a bond market source said.

A shady fundraising practice in China’s bond market, structured bond issuances (结构化发行) help companies raise funds by having them buy a portion of their own offerings, or having an affiliated party make the purchases, to inflate issuance sizes and create a better image to attract investors. Lower-rated local government financing vehicles, privately owned companies and some state-owned enterprises (SOEs) are the major users of such issuances.

The Shanghai-based securities firm, the country’s sixth-largest by assets (link in Chinese), is a major underwriter for bonds issued by SOEs like Yongcheng Coal. Its clients include companies in the coal and steel industries as well as local government financing vehicles.

Yongcheng Coal and its parent Henan Energy and Chemical Industry Group Co. Ltd. have outstanding bonds worth more than 50 billion yuan ($7.6 billion), including over 13 billion yuan of bonds involving structured issuances, many of which Haitong Securities assisted with, people with knowledge of the matter told Caixin. They said that the securities firm also assisted with structured bond issuances by SOEs Peking University Founder Group Corp. and Brilliance Auto Group Holdings Co. Ltd., both of which have also recently defaulted on bonds.

Public records show that a former researcher at Haitong Securities’ fixed-income department, Su Shangcai, joined Donghai Fund in August 2019 and was promoted (link in Chinese) to its deputy manager in April.

Financial regulators are clamping down on bond issuers buying their own debt, which is widely regarded as a threat to the stability of the bond market because it helps financially weak companies increase their risk of default.

Issuers shall not subscribe to issuances of their own bonds on the interbank market or buy them indirectly through related parties or asset management products, according to a regulation (link in Chinese) published by NAFMII on Nov. 18.

The same day, the regulator handed out its first punishment to a company over structured bond issuances, which it said “undermined market order” (link in Chinese), banning Jinggong Group Co. Ltd. from issuing bonds for two years.

As a self-regulatory organization, NAFMII is tasked with launching self-disciplinary investigation and collecting evidence. The sources said that Haitong Securities’ punishment will be determined by China’s top securities watchdog, the China Securities Regulatory Commission, which following NAFMII investigations has already launched a probe of Yongcheng Coal and its auditor for possible violations related to its November bond default.