By Nana Shibata And Ck Tan 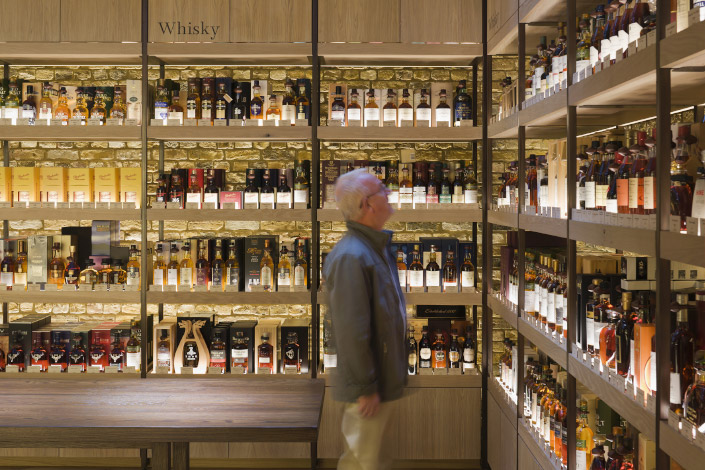 A customer looks at a collection of whiskeys on a shelf at a liquor store in London in 2012.

(Nikkei Asia) — Irish whiskey makers, reliant until now on coronavirus-hit Europe and the U.S., have sniffed opportunity in Asia.

The Irish whiskey-maker had earlier started to sell its products in Malaysia, but moved into large-scale exports to Asia as regional governments seemed successful in containing the spread of coronavirus.

“Asia does appear to have better control of Covid than other regions globally. That relative stability helps new products like ours,” Bernard Walsh, managing director of Walsh, told Nikkei Asia, adding, “This is a long-term investment, and we appreciate that Asia is composed of a diverse set of economies operating at different speeds.”

The company is focusing on making a strong impression — especially in Japan, the biggest market in the region. He called Japan the “jewel in the crown” of Asia.

Asian consumers, however, are largely unacquainted with Irish whiskey, with the drink making up just 0.04% of total whiskey consumption by volume in the region in 2019, according to Euromonitor.

Japanese and Scottish distillers are considered the big players, with about 5.9% share each in Asia. Irish spirits are categorized as premium spirits. For example, Hyde No. 3 The Aras Cask is priced in Japan at around 5,500 yen ($53.12) per 0.7 liter.

Even as Japanese whiskey makers such as Suntory look overseas, worried about the aging population of their home market, Irish makers see opportunity in Japan.

Joe Moore from Bord Bia — the Irish Food Board — told Nikkei that also Japan’s population is slowly decreasing, and research suggests that young people are drinking less than previous generations, there is a focus on “less but better.” He added that “Irish producers are focused on the premium categories and in general aren’t targeting the lower-valued categories on offer in traditional bars.”

Yasuhiro Ueda from Nihon Shurui Hanbai, a Tokyo-based liquor wholesaler, agreed with Moore, saying the “consumer is looking for premiums and something unique.”

The wholesaler began introducing Irish whiskey early 2020, choosing Hyde as its first brand. Ueda said, “Hyde is different from other Irish whiskey in its taste and focuses on its barrel,” which matches consumer demand.

“It is too expensive to enjoy every day, but Hyde was delicious,” said a self-employed man in his 30s, named Chiba, who bought his first Irish whiskey last spring. “After work sometimes, I want to drink something premium even if the price is high.” He said he had not drunk beer since shifting to whiskey some time ago.

He is the sort of young Asian customer that Hyde hopes to attract. A Hyde representative said the company is targeting male and female whiskey fans roughly between the ages of 25 and 45.

CEO Hyde, who is also the founder of the company, said, “We project that Asia’s increasing population, income growth levels and relatively early recovery from Covid [compared to the U.S. and Europe] will help to rapidly increase Hyde Irish whiskey sales in this region over the next five years.”

Hyde is aiming for 20% annual sales growth in Japan over that period.

China has a small and evolving group of wine drinkers who are turning to whiskey, John Isacs, a food and beverage critic with over two decades of experience in China, told Nikkei. “In particular, the single malt, a common whiskey, has become fashionable in the past two years in China’s first-tier cities among wine-loving, cigar-smoking and well-traveled businesspeople.”

He added, “Irish whiskey is not the mainstream, as it is a different animal, as its distillation progress is slightly different. It doesn’t have the prestige of Scottish or Japanese whisky.”

As in many other businesses, cracking Asia’s biggest market is big challenge.

To win market share, Isacs said, whiskey sellers needed to reach out to young cocktail-drinkers because “they are the future.”

Rather counterintuitively, the higher price for imported whiskeys could actually be a draw for affluent Chinese consumers who want to be associated with premium brands. “People in the 35 to 45 age range make a statement with [such products],” he said.

In China, the market for spirits is dominated by white wine and baijiu, distilled from sorghum, and affluent drinkers of Western spirits traditionally opt for brandy, including cognac.

But that did not stop Bord Bia from pushing Irish whiskey in the Chinese market.

“Young drinkers are now looking for something new, and a lot of them are turning to whiskey and new brand spirits,” said Dale Breheny, Bord Bia’s marketing adviser.

Irish whiskey accounted for about one-fifth of total alcohol exports to China in 2019, and it has grown by over five times in the past five years, according to Bord Bia.

Even so, it is considered new in China among traditional drinkers who prefer baijiu, which is often served at social gatherings and weddings. To penetrate further into the market, Bord Bia will focus on markets in first-tier cities, including Shanghai and Shenzhen.

“This is a growing category,” said Breheny. “We don’t need to [convert] drinkers from other categories. I don’t think the baijiu drinkers are going to change what they drink. There is space for everyone.”

For Irish whiskey makers, the U.S. market has been the biggest export destination for a long time. According to the “Irish Spirits Market Report 2019,” based on a market study by beverage research company IWSR, the largest export market for Irish whiskey — including Irish cream liqueur and the country’s traditional distilled beverage poitin — was the U.S., at 42% of the total. Outside its home market, the biggest markets after the U.S. are global travel retail, Russia and the U.K.

However, the coronavirus pandemic paralyzed the economies of all these important markets, and makers are trying to diversify to the East because, “as the situation regarding coronavirus is relatively calm in Asia, the level of [whiskey] consumption is normalizing, especially in China and Japan,” Moore told Nikkei. “Consumption hasn’t reached that of previous years, but the market condition is recovering.”

On top of that, Irish companies “have been working hard to diversify their markets due to Brexit,” Moore noted, referring to Britain’s divorce from the EU.

Another Irish distiller, Origin Spirits Ireland, is also trying to expand distribution in Asia, after it started to sell in Singapore and Japan. Managing Director Patrick Shelley told Nikkei that it aimed to be among the top 10 brands in Asian whiskey markets by mid-2022.

Shelley said, “Asia has the potential to become the largest market for Irish whiskey in the next 10 years. Irish whiskey is still relatively unknown in Asia, but its style and taste appear to appeal to the Asian palate.”