By Huang Yanhao and Cora Zhu 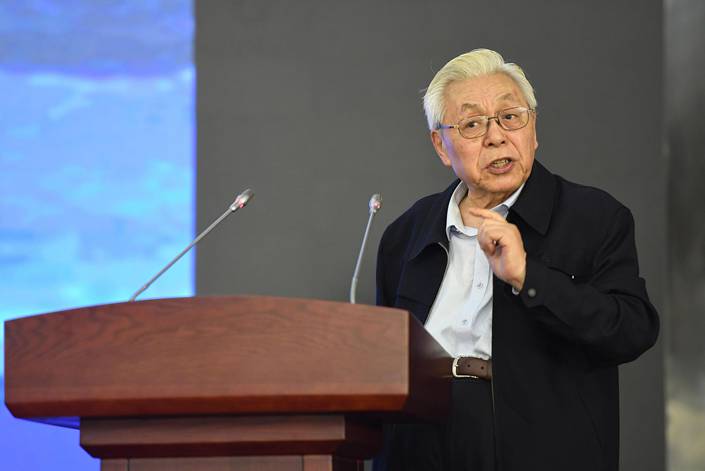 As part of its project of landing space exploration crews on the moon, China should establish a space station in lunar orbit rather than one orbiting the earth, the father of China’s lunar mission said Wednesday in a meeting.

“It’s better to build the space station in moon orbit so the future moon landing would not be as difficult as the former Apollo program,” said Ouyang Ziyuan, a Chinese Academy of Sciences academician and first chief scientist of China’s lunar probe project.

The Apollo program of the American National Aeronautics and Space Administration (NASA) succeeded in landing the first humans on the Moon in 1969. The last U.S. pair of moon walkers was from the Apollo 17 mission in December 1972.

Ouyang’s suggestion of building a lunar space station, first proposed in 2018, came before the U.S. disclosed its latest moon landing plan, which includes putting a space station into lunar orbit. His discussion of the idea suggests that China’s top space scientists are continuing to work out plans for lunar exploration as the country’s space ambitions expand.

China is proceeding with development of the Tiangong Space Station in earth orbit and will finish construction by next year. It will be the only station circling the earth after the service life of the International Space Station (ISS) runs out in 2024. The Long March-5B rocket, China’s new large-carrier rocket, made its maiden flight in May 2020 to launch space station modules. In 2020, China successfully completed the Chang’e 5 lunar mission, collecting rock samples from the surface of the moon and returning to earth.

The American Artemis Program announced last year by Vice President Mike Pence aims to put the first woman and the next man on the moon through two stages by 2024. Before eventually landing moon walkers, the project would send robotic rovers to the surface of the moon and fly four astronauts around the moon on a 10-day journey.

One feature of NASA’s multibillion-dollar program would be the 2024 launch of a Lunar Gateway, which would be a space station orbiting the moon. The gateway would serve as a rendezvous point for two astronauts to board a spacecraft that would transfer them to the surface of the moon.

NASA has set up collaborations with international partners for the Lunar Gateway, including space authorities in Japan, Canada and the European Union. Russia’s Roscosmos also showed interest in the cooperation.

Ouyang proposed a similar plan more than a year before the announcement of the Artemis Program, urging construction of a space station similar to the Lunar Gateway proposal and skipping an earth-orbiting space station.

There have been decades of space stations operating in earth orbit, such as the Soviet Union’s Mir Space Station and the ISS. Ouyang said it would not carry much significance for China to build a new space station now.

“Most important space station tasks have been done during the past decades,” he said.

“I think it did not mean we failed to understand the advantages” of building the lunar station, Ouyang said. “Instead, the problem is the lack of technology.”

Wu Yanhua, the deputy head of China’s National Space Administration, said the country would first focus on technology, and space station construction would be a priority. Further discussion of crewed lunar missions would come after the completion of the earth-orbiting station, he said last year.

Unlike the Cold War-era space race between the U.S. and the Soviet Union, China will focus on scientific research value and exploration in future crewed moon missions, Wu said.