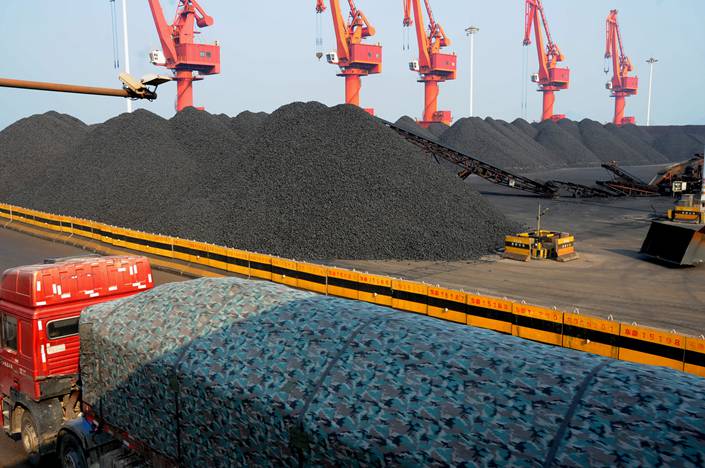 Vehicles haul imported coal at a terminal at the port of Lianyungang on Dec. 19.

The country brought in a total of 39. 07 million tons of coal, 14 times more than it did in December 2019, data from the General Administration of Customs showed on Thursday.

That ended a seven-month streak of year-on-year declines and also meant imports for the year were up 1.49%, compared to a 10.8% drop for the first 11 months.

The sudden rise in imports comes as China’s top economic planner said late last month that the country should “increase imports appropriately” in response to power shortages in some parts of China.

December’s imports exceeded market expectations, a coal analyst who declined to be named told Caixin, but said that high prices mean the impact on power shortages may be limited. According to China Coal Transportation and Distribution Association, the domestic coal spot price at Bohai Rim ports rose to 706 yuan ($109) per ton, up 11% from the beginning of this month.

Power consumption in several regions hit record highs in December as a colder-than-usual winter weather swept across the country, driving up heating demand. In order to ensure sufficient power supplies for residential areas, some local governments —including that of major manufacturing city Yiwu — rolled out restrictions on electricity use by factories, offices and even streetlights.

Read More
Cover Story: Why the Lights Are Going Out in China

Meanwhile, growth in domestic coal production slumped. More safety inspections in major coal producing region Inner Mongolia led to its output declining 4.6% to 901 million tons in the first 11 months of 2020, dragging down national production growth over the period to just 0.4%. By contrast, production increased 4.5% between January and November 2019.

A report published by Essence Securities on Jan. 2 said new coal import quotas will be given out this month, which could ease the tight supply. But the China Electricity Council’s weekly report released Monday showed that coal prices hit a two-year high in the week ended Jan. 8, and said greater imports may not be enough to ease tight supply.