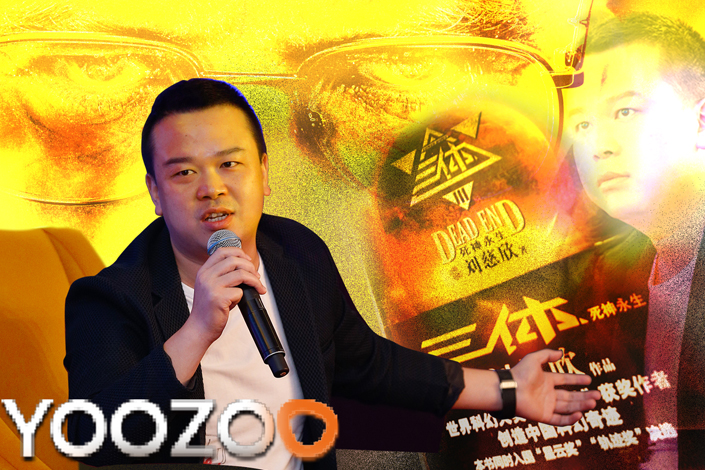 He was inspired by the U.S. TV series “Breaking Bad,” and used cats and dogs as test victims before poisoning at least three people, leaving a gambling magnate dead.

Before that, he was a France- and U.S.-educated lawyer and executive in one of China's best known companies.

That's the profile that's slowly emerging of the main suspect in a murder case that has riveted China over the past few weeks.

The case involving the Christmas Day death of Yoozoo Games Co. Ltd. chief Lin Qi initially captivated China because of the company’s ties to a high-profile movie project based on a hit series of science fiction novels. But increasingly bizarre details of the case have provided their own draw, including last week’s claim by a woman that a child recently fathered by Lin out of wedlock with her sister was due a share of Lin’s fortune worth hundreds of millions of dollars.

The latest details to the case read like the plot to a thriller, and were provided to Caixin by several people close to Lin and the company, who all spoke on condition of anonymity due to the sensitivity of the matter. Officials from the Yoozoo unit headed by Xu Yao, the man believed to be the main suspect, did not return a Caixin request for comment. Caixin also could not reach Xu or the legal team he has reportedly hired to handle his case for comment.

Lin was hospitalized on Dec. 15 and died about 5 p.m. Christmas Day, a person close to him told Caixin. Another person familiar with the case said Lin had been taken to Shanghai’s Huashan Hospital, which determined he had been poisoned by tetrodotoxin, a neurotoxin most often associated with pufferfish, a Japanese delicacy known for its potential deadliness if the toxin isn’t cleaned out before consumption. If ingested, it can lead to dizziness and vomiting as well as numbness of the fingers and mouth, and at this time there is no effective treatment.

Lin was given a massive transfusion of about 40 liters of blood, and underwent surgery that seemed to stabilize his condition. But because he was also suffering from mercury poisoning at the time, he started bleeding from his organs, causing his heart and lungs to fail, which ultimately resulted in his death.

Two people close to Lin told Caixin that the investigation found at least five types of poison in his body, including the mercury and tetrodotoxin.

Shortly after police first announced Lin’s poisoning, they said the suspect in the case was a colleague at Yoozoo but only gave the surname as Xu. People from the gaming industry said that could be Xu Yao, a former Yoozoo director who worked at the company’s motion picture subsidiary, where he was leading a project to create films based on the acclaimed “The Three-Body Problem” science fiction novels.

Xu was obsessed with the U.S. TV series “Breaking Bad,” which centers on a high school chemistry teacher who becomes a regional drug kingpin, and had set up his own poison manufacturing lab in Shanghai’s Qingpu district, according to more than one person close to Lin. Xu then purchased more than 100 types of poisons on the dark web, and would frequently test them out on dogs, cats and other pets. After determining what could kill such animals, he may have set about preparing to poison people, the sources said.

Xu then allegedly prepared a bottle with 30 probiotic pills and gave it to Lin, putting a poison pill in with the others, according to their account. He got Lin’s secretary to actually administer the pills, with the secretary also taking some. Several days after starting to take the pills Lin took the poisoned one and immediately began feeling sick and was hospitalized before dying 10 days later.

One of the people close to Lin said that Xu was a seasoned legal expert who has refused to make any confession. To date many individual links in the case have been uncovered, including Xu’s purchase and his manufacture of poison. But an actual chain of evidence, including details of how the actual poisoning occurred, is still lacking and could pose a challenge to investigators.

Numerous sources from the gaming sector told Caixin they didn’t know of any debts or personal connections outside work that may have motivated Xu to take such actions.

Born in 1981, Xu had an extensive legal background, studying the law first in China before attending and graduating from the insurance law section at France’s Paul Cézanne University in 2006. Two years later he completed study at the University of Michigan law school in the U.S. He returned to China and worked at well-known financial conglomerate Fosun Group for nearly 10 years in the company’s legal section before joining Yoozoo in 2017. People who knew him at Yoozoo described his as professional, low key, and a quiet man.

As Lin was getting anxious about delays to the “Three-Body Problem” project in 2017, Xu was recommended to him and joined Yoozoo as chief risk control officer in the company’s legal and government affairs office. Xu spent nearly three years working out issues surrounding the film rights involved with the “Three-Body Problem,” and in 2018 became CEO of the production company tasked with making the project, in charge of incubating and developing intellectual property for the project.

While Lin appreciated Xu’s legal skill and expertise, he began to feel he was less suited to involvement with production of the actual films and was planning to give that responsibility to the company’s vice president Zhao Jilong, a vice president at Yoozoo’s film affiliate that was working on the “Three-Body” project.

Caixin has learned that besides Lin, Zhao and one other person at Yoozoo were also poisoned. After feeling sick, several tests revealed that Zhao had been slowly poisoned with mercury, with tests revealing nearly 10 times the ordinary level of mercury in his body. Following treatment, he is expected to leave the hospital in the near future.

The other poisoned employee worked in the online game unit that was Yoozoo’s main business.

A source familiar with Yoozoo told Caixin that Xu had bad relations with Zhao, and that the two had fallen into a rivalry in the course of their work on the “Three-Body” project. Details of Zhao’s poisoning have yet to be made public. But the case has caused broader unease at the company, leading many of its top executives to get tested for poisoning since Lin’s death, the sources told Caixin.

Before the latest intrigue, Yoozoo made headlines last September when it announced it had brought in U.S. giant Netflix to co-produce the “Three-Body” project, with Lin and Zhao as two of the executive producers. Xu’s name wasn’t included in that announcement.