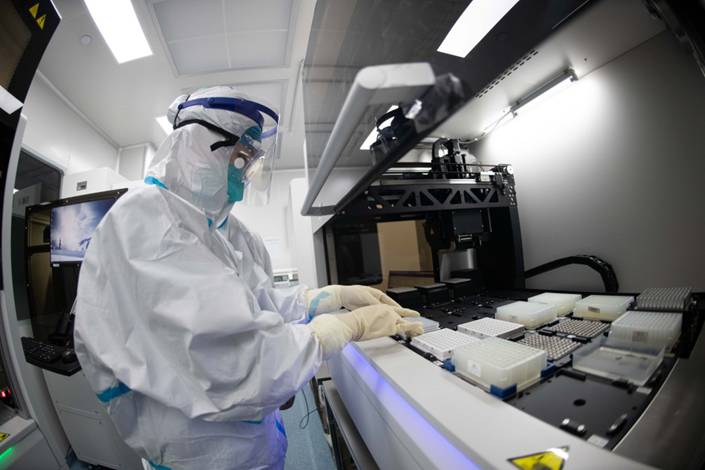 The new rules have presented a major opportunity for test kit manufacturers and laboratory institutes that offer diagnostic services.

Stocks of Chinese coronavirus test kit makers and diagnostic labs have rallied over the past two days on news of a rigorous new testing regime for those travelling domestically during Lunar New Year as the nation works to extinguish several local clusters.

The share gains came after the State Council, the country’s cabinet, issued a strategy document (link in Chinese) Wednesday on containing outbreaks in vulnerable rural areas, calling for the authorities to keep track of travelers ahead of the nation’s biggest annual holiday. The weeklong holiday sees hundreds of millions of people return to their hometowns in the world’s biggest annual human migration.

The massive testing mandates are estimated to require some 600 million to 1.2 billion test kits, generating between 15 billion yuan to 30 billion yuan for the kit manufacturers, and 60 billion yuan to 120 billion yuan in revenue for diagnostic agencies, according to calculations by Hua’an Securities. These estimates were based on product and service prices listed in public medical institutes and labs in major cities, and the estimated number of tests required by the rules.

The State Council edict came after the National Health Commission (NHC), China’s top health body, published an action plan that requires people returning to rural regions from other provinces, or areas that have been designated as medium- to- high risk due to newly confirmed cases, to present a negative coronavirus test result within the prior seven days to local officials and self-isolate at home for 14 days after arrival.

The rule also applies to people in certain high-risk jobs, including those working in imported frozen food chains, at ports, quarantine facilities and public transportation.

While the State Council orders local authorities to register “returnee migrant workers” on arrival, monitor their health daily and encourage them to stay home and take precautions against Covid-19, the NHC plan goes further, saying they must submit to two more tests on the seventh and 14th day after arrival.

The new rules have presented a major opportunity for test kit manufacturers and laboratory institutes that offer diagnostic services, according to Hua’an Securities. For example, a Shanghai-based worker wanting to travel to Henan province and then return after the festival will require four rounds of testing, Soochow Securities said in a report.

The rules will take effect from Jan. 28, two weeks ahead of the Lunar New Year on Feb. 12 and will remain in effect until March 8. However, the undertaking is a challenge for regional authorities, who must oversee county-level hospitals collecting and sending samples to higher level hospitals or third-party medical institutes that carry out the tests.

BGI Genomics told Caixin it would ramp up production capacity to crank out 2 million kits per day, and a new diagnostics lab it recently built in Hebei province’s outbreak-hit capital Shijiazhuang is equipped to examine as many as 1 million samples every day.

Demand for domestic air and train travel has slumped amid the resurgence of the virus, with the country’s three biggest airlines reporting declines in passenger numbers and ticketing platforms seeing sluggish interest in journeys along major rail routes in the run-up to the holiday.

China confirmed 103 new Covid-19 cases on Friday (links in Chinese), 41 less than the previous day, according to the NHC. Of those, 94 infections were locally transmitted and 9 imported from abroad.

Outbreaks persist in the northern and northeastern provinces of Heilongjiang, Jilin, and Hebei which surrounds Beijing. The capital logged three new local infections on Friday.