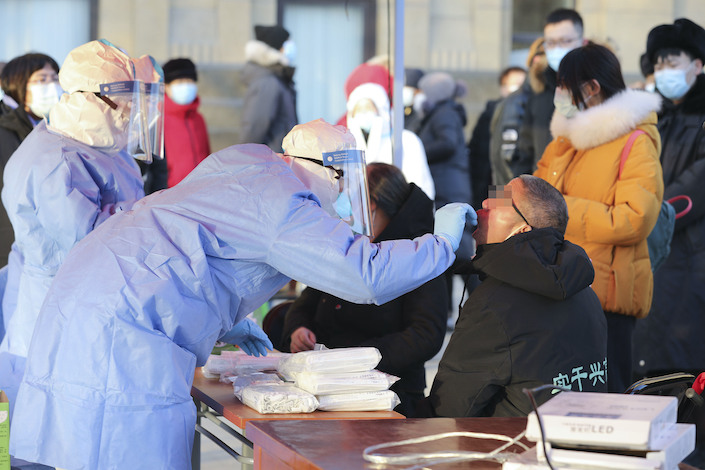 Beijing imposed a partial lockdown Wednesday after about a dozen new Covid-19 cases were detected, including two cases of the more transmissible U.K. variant.

Amid a resurgence of coronavirus cases ahead of the Chinese New Year holiday, China’s central government told cities across the country to get ready to conduct mass testing within days.

Cities with a permanent population of fewer than 5 million should be able to complete mass testing within two days by pooling resources within a province, while cities with a permanent population of more than 5 million should have the capacity to complete testing within three to five days with support from both the province and the central government, according to a notice (link in Chinese) issued Wednesday by the Joint Prevention and Control Mechanism of the State Council.

After receiving a positive nucleic acid test result, hospitals should report to health authorities online within two hours, and the disease control institutions shall immediately start an epidemiological investigation and complete the review within two hours, the notice said.

Once a positive case is confirmed, no additional procedures such as consolation or review should be allowed. Local health authorities should hold a press conference no later than the next day once a new case is detected, and the affected city should host a daily press conference with updates on the outbreak.

Customers who buy fever medicines and antibiotic drugs should register their identifications, and drugstores and clinics should report to health authorities within two hours any suspected patients who have fever, cough, sore throat, loss of smell and taste, diarrhea and other coronavirus-related symptoms.

The guidelines for prevention and control should be strictly implemented in places where people are concentrated, such as nursing homes, welfare institutions and prisons, and close management should be implemented when necessary, the notice said. Gatherings in all religious venues will be suspended.

Two cities in northeast China’s Jilin province were locked down following a recent resurgence of Covid-19 traced to a superspreader. Hebei provincial capital Shijiazhuang and the cities of Xingtai and Langfang with a combined population of 23 million people were locked down last week after the province reported more than 500 cases in the latest round of outbreak.

Beijing imposed a partial lockdown Wednesday after about a dozen new Covid-19 cases were detected, including two cases of the more transmissible variant originally discovered in the United Kingdom.