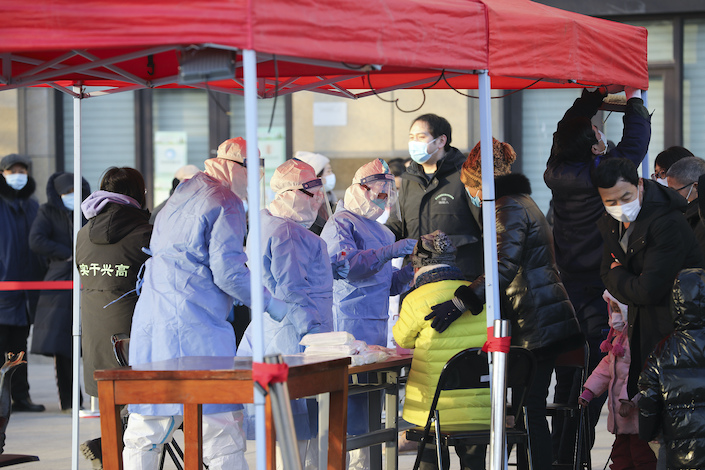 Beijing is conducting coronavirus mass testing in the Daxing district.

Beijing imposed a partial lockdown Wednesday after about a dozen new Covid-19 cases were detected, including two cases of the more transmissible variant discovered last month in the United Kingdom.

Beijing became the fourth city to find the new variant after Shanghai reported the first imported such case in December. It shows that the U.K. coronavirus variant is spreading locally. The new strain has now been found in at least 60 countries and is thought by the World Health Organization to be 50% more infectious than the original.

The Chinese capital will screen all people entering Beijing from foreign countries since Dec. 10, said Xu Hejian, director of the information office at the Beijing municipal government. Now people entering Beijing from abroad are subject to a 14-day mandatory quarantine in hotels. After they complete the quarantine and test negative, they are required to undergo a seven-day quarantine at home or in hotels and another seven days of health monitoring.

As of the end of Tuesday, nine confirmed cases and one asymptomatic case were reported in the southern Daxing district of Beijing. The new round of infection is believed to have been imported from abroad, local health authorities said.

All 1.6 million residents of Daxing are barred from leave Beijing unless they have received special permission from authorities and tested negative for Covid-19 in the past three days, the district said. Residents of five Daxing neighborhoods where the cases were detected were ordered to stay home.

All kindergartens and middle schools in the city will be closed. One of the new confirmed cases Tuesday involved a nine-year-old student. The Daxing district has quarantined nearly 2,000 students, faculty members and their families related to the student’s school.

With Chinese New Year approaching in three weeks, large numbers of people plan to return to their home towns from the cities where they work. National health authorities Wednesday urged testing facilities, especially in rural areas, to speed up testing to ensure that people can go home with negative results within the past seven days.

Test results should be available within 12 hours after test facilities receive samples, according to a plan issued by the Joint Prevention and Control Mechanism of the State Council.

The authorities suggest that people stay in the places where they work and not take unnecessary trips during the Chinese New Year holiday, which starts Feb. 11. People returning to home towns are required to stay at home for 14 days of health monitoring with Covid-19 testing every seven days, according to the State Council plan.

Meanwhile, strict control measures in certain areas have also raised concerns. In the Gaocheng district of Shijiazhuang, one of three cities in Hebei province that are under lockdown, an old man was tied to a tree because lockdown enforcement personnel tried to stop him from entering a village to buy cigarettes. The Communist Party leader of the village was suspended and public security authorities launched an investigation into suspected illegal restriction of personal freedom.

Several cases involving rough control measures were reported recently. In one case, volunteer enforcement personnel stormed into the house of a family playing mahjong at home and damaged property.