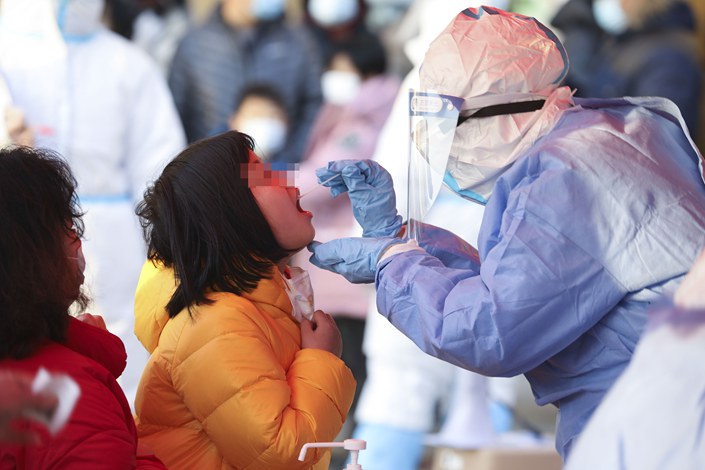 Genomic sequencing of two local coronavirus cases diagnosed on Sunday suggests they belong to the more transmissible B.1.1.7 strain, which was first identified in the United Kingdom in September.

The two were among about a dozen new Covid-19 cases detected in Beijing, which went into partial lockdown Wednesday.

The SARS-CoV-2 variant has concerned experts because of estimates that it is about 50% more transmissible than other strains of the new coronavirus, meaning it could more quickly overrun health systems. There is no evidence that is more deadly or more likely to result in severe disease.

The Chinese mainland reported its first case of Covid-19 caused by the B.1.1.7 strain in Shanghai in December.

The variant cases were reported at a routine press conference by Pang Xinghuo, deputy director of the Beijing Center for Disease Control and Prevention.

B.1.1.7 is one of the new coronavirus strains labeled “variants of concern” because of mutations that might change the way they infect and interact with people. It is prevalent in London and southeastern England, and is also spreading in the U.S., where the local Centers for Disease Control and Prevention predicts it will become the dominant variant by March.

There is no evidence the B.1.1.7 variant will be less susceptible to coronavirus vaccines. Research released by BioNTech on Wednesday, which wasn’t peer reviewed, suggests the company’s mRNA vaccine will be effective against it.

Beijing is the fourth jurisdiction in China to publicly disclose the case of a person infected with the B.1.1.7 variant. Guangdong reported a case on Jan. 2, followed by Shandong on Jan. 5.

All 1.6 million residents of Daxing have been barred from leaving Beijing without special permission from the authorities, and only after testing negative for Covid-19 within the previous 72 hours, the district said. Residents of five Daxing neighborhoods — Ronghui, Tiangongyuan, Tiangongyuan Xili, Tiangongyuan Zhongli, and Tiangongyuan Nanli — have been ordered to remain in their homes.

Beijing has also shuttered all kindergartens and middle schools in an effort to bring the new outbreak under control, after a 9-year-old student was among the cases. Daxing authorities have quarantined nearly 2,000 students, faculty members and their families in connection with the case.