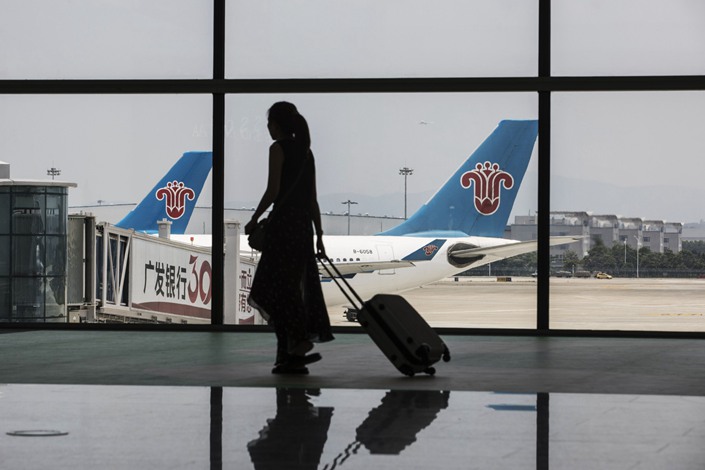 A woman carrying luggage is silhouetted as she walks past aircraft operated by China Southern Airlines Co. sitting on the tarmac at Terminal 2 of the Guangzhou Baiyun International Airport in Guangzhou

Passenger volume of major Chinese airlines plunged in December as a winter resurgence of the Covid-19 pandemic decimated travel and slammed the brakes on a recovery for a business that was hit especially hard by the virus.

All of China’s largest listed airlines reported declines in passengers in December after months of gradual revival as the country brought the pandemic largely under control. However, recent flare-ups in several provinces derailed the recovery and dampened hopes of a passenger surge for the Lunar New Year Holiday next month, analysts said.

China Southern Airlines, the country’s largest carrier by passenger volume, posted the highest load factor among state-owned rivals of 70.5% in December, down 3.25 percentage points from the previous month and 10.9 percentage points from the same time a year ago. Air China and China Eastern Airlines also posted declines in passenger load factors in December, at 67.6% and 68.2%.

According to the latest data from the nation’s air regulator, travelers in China logged 420 million air trips last year, representing 63.3% of levels from 2019 before the global pandemic. That compares with 710 million trips forecast by the regulator at the beginning of the year. The five listed airlines reported annual passenger drops of between 20% and 40%.

Chinese airlines were most affected in February and March at the height of the domestic outbreak, which would normally be a busy time for travel during the long Lunar New Year holiday. The sector has been gradually recovering since then.

Since November, new flare-ups have been reported in several Chinese provinces, leading to new lockdowns on cities in Hebei and Jilin. The simmering outbreaks appeared to dampen the annual rush for tickets along major travel routes ahead of the New Year holiday, which runs for a week starting Feb. 11, as many people postponed or canceled plans to return home.

Chinese officials have urged residents to limit unnecessary cross-country travel. Some parts of the country also require inbound travelers to show a negative virus test or undergo quarantine upon entry.