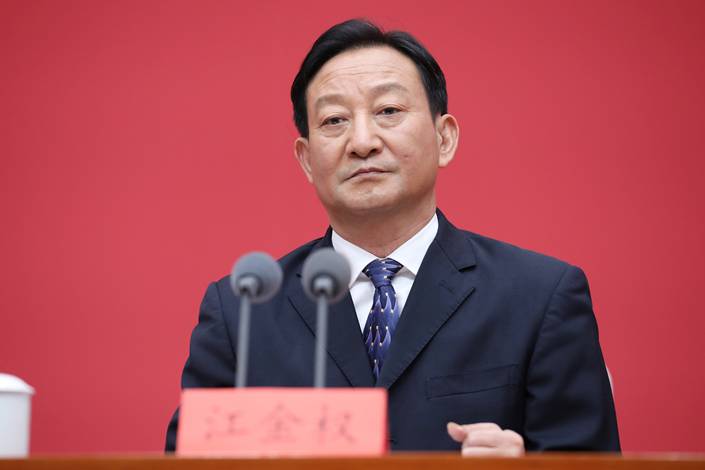 China must mobilize all its national resources, including private-sector research and development, to overcome key bottlenecks and become more self-reliant in the face of the U.S.-imposed technology blockade, a top Communist Party theoretician said.

Jiang Jinquan (江金权), head of Communist Party’s top ideology think tank, the Central Policy Research Office (CPRO), made a five-point proposal for achieving technological independence from the United States in a commentary published on Monday by the Study Times (学习时报), the official newspaper of the elite Central Party School.

The top party researcher appealed to the private sector in China, saying that the party supported private capital and businesses in their efforts to research and develop emerging technologies.

Jiang said the country would “buy achievements” resulting from private-sector R&D to “encourage the formation of a situation that let a hundred flowers bloom together.”

More than half of the country’s high-end equipment, basic software and core components rely on imports, he noted.

In October, Jiang was tasked to lead the party ideological think tank, where he had been in charge of day-to-day affairs since February 2018.

The country must marshal all national resources available, known as the “whole-of-nation” system (举国体制), to resolve bottlenecks in critical technology capabilities as soon as possible, Jiang said.

“National teams” should be established to boost the foundation of basic research for scientific breakthroughs and inventions, he said. The researcher did not spell out how far the government might go in assigning projects.

Enterprises would also be tasked to lead the implementation of major applied technologies, in order to overcome the disconnect between R&D and commercialization, Jiang said.

The 61-year-old head of the CPRO added that science and technology researchers should be free from bureaucratic “trifles” such as filling out forms or invoices to concentrate on R&D “without distractions.”