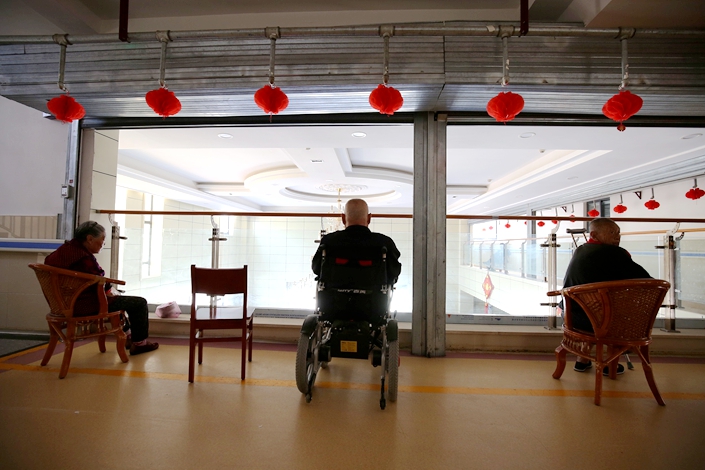 Some unscrupulous private firms in China are duping older people into making high-risk investments on the promise of a secure place to live in the fast-aging nation.

Cao Ronglin, 62, jumped last week from a bridge over a river in Yiyang, Hunan province, according to eyewitness accounts. His body was recovered on Friday.

Cao paid most of his savings into investment products offered by local elderly care provider Yiyang Nanuo Elderly Apartment Co. Ltd. in return for a bed in a care home, according to a person familiar with his situation. But Cao lost his lodgings after the company became embroiled in an illegal fundraising scandal.

The incident spotlights how some unscrupulous private firms in China dupe older people into making high-risk investments on the promise of a secure place to live in a fast-aging nation with a severe shortage of nursing homes.

Cao, a twice-married day laborer with one stepson from his second union, sunk 170,000 yuan ($26,257) into Nanuo “contracts” over several years, according to Liu Yimu, a volunteer advocate for affected families. In return, Cao received regular “dividends,” a bed in a Nanuo residential home and discounts on certain services.

The company secured contracts with many local seniors, with 69-year-old former civil servant Xu Fangping telling Caixin that she had handed over 220,000 yuan since 2012, when a Nanuo salesperson took her on a tour of a care home.

“At the time, they came into our community to promote themselves, saying (state newspaper) Hunan Daily had praised their care model and (state-linked broadcaster) Hunan TV Urban had reported on them,” Xu said. “We believed the government.”

But their trust was sorely misplaced. Last year, police in Yiyang announced that they had arrested Nanuo’s legal representative, Lu Guanghui, for suspected illegal fundraising, roiling the company’s operations and leaving residents out of pocket.

Cao not only lost his place at the care home, but was also left without the money he needed to pay for his wife’s hospital treatment, according to Liu. The link between his death and his investments remains unclear. Contacted by Caixin on Saturday, Cao’s family said they were preparing to negotiate compensation with the government and did not wish to speak further.

Lu founded Nanuo in 2012 with registered capital of 10 million yuan, according to commercial records. Five years later, he established another company, Yiyang Guanghui Yiyang Health Industries Co. Ltd., which operates as a medical care group and boasts one of Hunan’s few “fully equipped” large elderly care institutions, according to the company’s website.

In July, local police said they were holding Lu and other staffers on suspicion of illegally collecting the personal savings of members of the general public, and urged “relevant investors” to register by the end of the following month or deal with the fallout from the alleged crimes themselves.

In August, police said they had detained the legal representative for another Yiyang-based elderly care center, surnamed Liu, on similar charges. Residents of homes operated by both companies told Caixin that subsequent attempts to inquire about the cases yielded no information on their progress.

China is facing a looming aging crisis, driven by gains in life expectancy and low birth rates stemming in part from the legacy of a decades-long one-child policy. According to United Nations estimates, nearly one in four Chinese people will be over 65 years old by 2045. Government data put that proportion at just over one in eight last year.

Demographic changes are propelling increasing demand for elderly and end-of-life care, but the public sector is struggling to plug the gap. As private businesses look to take advantage, lax regulation has left room for opportunistic scammers to con some elderly people into parting with their hard-earned savings.

Hunan appears to be a hotbed for such dodgy dealings. In November 2019, the province’s financial supervision bureau and police department jointly announced that they had detected 45 cases of illegal fundraising in the elderly care sector since the start of the previous year, involving 3.5 billion yuan in capital.

According to incomplete statistics, 327 “non-public enterprises” in Hunan operate in the elderly care industry. Of those, 37 have been suspected of illegal fundraising, according to public security agencies.

In the U.S., call the National Suicide Prevention Lifeline at 1-800-273-8255 (TALK) or go to SpeakingOfSuicide.com/resources for a list of additional resources