As Labor Dries Up, Farms Turn to Driverless Machines 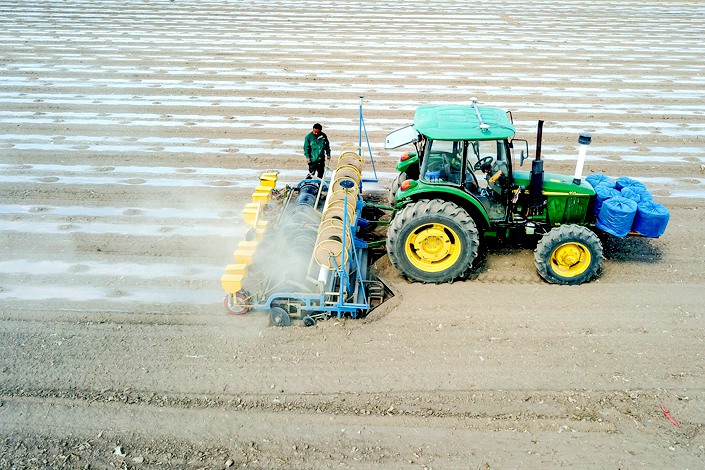 Things have come a long way since the humble scarecrow. Sales of self-driving tractors and other autonomous farm equipment are surging as demographic changes in China’s countryside are forcing farmers to embrace new technologies.

In the first half of this year, sales of self-driving agricultural machines grew by 213% year-on-year to more than 11,700 units, the Xinhua News Agency reported (link in Chinese) Wednesday, citing data from the Ministry of Industry and Information Technology (MIIT).

Sales of self-driving agricultural machinery amounted to about 520 million yuan ($77.2 million) in 2018, according to data compiled last year by market research firm Leadleo.com. It estimated that sales will rise to 980 million yuan this year and 1.73 billion yuan in 2023.

Over the past four decades hundreds of millions of rural farmers and laborers have migrated to the cities in search of better-paid work, leaving many agricultural regions devoid of the workers needed to till the land. This phenomenon of “rural hollowing out” has become increasingly severe –– China’s urbanization rate will reach 65.5% in 2025, and the percentage of the workforce employed in agriculture will likely drop to about 20%, according to a report (link in Chinese) released in August by the Chinese Academy of Social Sciences (CASS). Government data show that the urbanization rate was 60.6% at the end of 2019, up from 52.6% at the end of 2012, while employment in agriculture that year was 33.6% of the workforce.

The aging population is also putting pressure on the rural economy. The CASS report estimates that the number of people aged 60 or higher living in the countryside will rise to 124 million in 2025, making up 25.3% of the rural population.

The development of self-driving farm equipment began rather late in China. The State Council, China’s cabinet, released a guideline (link in Chinese) on the transformation and upgrading of the agricultural automation industry only in December 2018, urging the the development of machinery powered by the Internet of Things, big data, mobile internet, smart control and satellite positioning.

Navigation is considered one of the core technologies of self-driving agricultural equipment. Over the past few years, the development of the BeiDou Navigation Satellite System, China’s homegrown GPS alternative, has also contributed to the growth of the agricultural machinery sector. A number of Chinese enterprises — including navigation companies such as Shenzhen-listed Beijing Unistrong Science and Technology Co. Ltd. and Shanghai Huace Navigation Technology Ltd. as well as agricultural tech company Guangzhou Jifei Technology Co. Ltd. — have entered the field of autonomous farm equipment.

As opposed to self-driving cars, the application of self-driving tractors and other farm equipment is relatively simple, making it easier to commercialize. An official from the MIIT said that the ministry will work with the Ministry of Agriculture and Rural Affairs and the Ministry of Finance to push ahead the commercialized application and market adoption of unmanned agricultural machinery, according to Xinhua’s article.

Although some self-driving agricultural machines on the market have achieved the level of “operating without hands and feet,” a source from Guangzhou Jifei told Caixin, “it’s still necessary to have a driver in case of any accident.”

Local governments have also introduced subsidy programs to boost the interest of buyers. Currently the authorities in the Xinjiang and Inner Mongolia autonomous regions and Heilongjiang province offer subsidies of 20,000 yuan to 26,000 yuan depending on the type of equipment purchased.