Fisher: The 2021 Tailwinds Driving Stocks in China and Everywhere Else 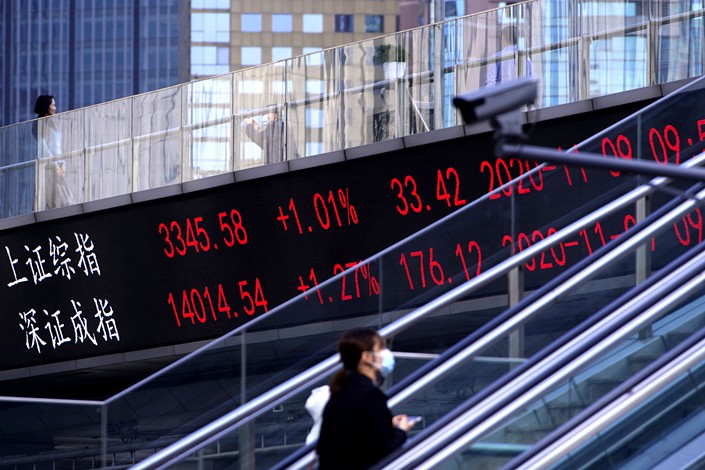 Hurray! Terrible 2020 is finally behind us. Ahead is a world economy poised to rebound, warming sentiment and a benign global political backdrop. It’s a recipe for stocks to keep climbing in 2021 — in China and globally.

Awful as 2020 was at a human level, stocks proved resilient. Chinese stocks led the way, soaring 29.9% despite the winter’s Covid-driven plunge. Overall, world stocks weren’t too shabby. They gained 9.2% — in line with the moderate positive return I forecast last January. Of course, I didn’t see the Covid stumble including unprecedented global economic lockdowns, a steep worldwide economic implosion and an all-time record-fast global bear market off of all-time February highs. But this highlights a crucial investment lesson: You should exit stocks only if you see a huge negative others don’t. Coolly following that rule last winter would have helped you ride Chinese stocks’ rocketship recovery.

That applies now. Bear markets have two main possible causes: Either a wallop — a huge, unforeseen shock wiping trillions of yuan off global GDP, like the lockdowns. Or euphoria inflates expectations to unattainable levels — so markets fall when reality disappoints.

I see neither now. Pundits worried autumn’s global Covid surge and new lockdowns would crush Western economies — and shrink demand, threatening Chinese exports. But that’s no wallop. Worldwide manufacturing activity continues to expand, too. But also, global service firms — devastated during the spring’s lockdowns — are faring far better lately. They’ve adapted in many ways, with restaurants ramping up takeout efforts and retailers shifting to online ordering. The world’s economy hasn’t proven as resilient as China’s, but society is learning how to live with restrictions.

Of course, stricter measures may come, packing a bigger punch. But even this likely has a muted effect. Nearly everyone expected renewed restrictions, sapping shock value. Markets pre-priced them and looked far ahead — to a time when Covid is largely, if not completely, history. Even Britain’s third sweeping lockdown couldn’t prevent U.K. stocks from jumping in 2021’s first week. Besides, later in 2021, overseas economies should begin normalizing as Covid vaccine distribution widens. That’s bullish for Chinese stocks. Western pundits paint China as isolated from global events, but Chinese and global equities have a positive correlation over the past decade. What’s good for the world is good for China, and vice versa.

Western observers also tout continued U.S.-China tariff battles as a major risk to stocks. But they tout them because they are widely known. And, as I noted throughout 2020, even far higher tariffs than we have seen lack the scale to wallop Chinese or U.S. markets. If stocks rose in 2019 and 2020 amid widespread trade war fears, why would 2021 be different?

Politically, surprises are unlikely. America’s election delivered unprecedented thin margins in Congress — unusual early and unprecedented gridlock this early in a new president’s term. President Biden will have his party have the weakest senate majority of any new American Democratic Party President since Grover Cleveland in 1885 — 136 years ago. They will have the lowest margin in the House of Representatives, Congress’s lower chamber, since 1900. This early relative gridlock is a huge gift to stocks, as I detailed last month. U.S. stocks are up 15.3% in dollars since Election Day. The CSI 300 has jumped 16.9% in yuan. This party should last.

Major Asian and European governments are similarly set for inactivity. Japan is due to vote no later than October. Prime Minister Yoshihide Suga’s Liberal Democratic Party has a stranglehold on the Diet, but the government’s approval rating flounders. Pushing big bills now would be political suicide. In Europe, March’s Dutch election is unlikely to yield anything more than an unwieldy, gridlocked government. Ditto Germany, where major parties have deep divisions and no leader rivaling outgoing Chancellor Angela Merkel’s popularity.

Sentiment-wise, optimism is growing but isn’t overflowing. I use 19 metrics to help weigh sentiment. Nine do signal euphoria, including IPO performance, with a few hotly hyped American offerings soaring in December debuts. But while U.S. IPO issuance is at its highest point since the dot-com bubble, global issuance is well below levels present before 2000’s euphoric global market top. Another 10 indicators, meanwhile, show only mild optimism, skepticism or pessimism. Western pundits’ sky-high enthusiasm for Chinese IPOs is another sign sentiment is heating up. Sentiment warms through optimism a long time before true Euphoria hits and then it lingers many months before bear markets begin.

This tells me markets are behaving like they do late in a bull market, not early. That may not surprise you, given China avoided bear market territory last winter and now nears the sixth year of its bull market. But in the West, steeper winter declines brought a technical bear market, making the current bull market just 10 months old. Hence, most assume many years of gains remain. What they miss: While its magnitude and fundamental justification made it a bear market by definition, 2020’s decline behaved more like a hugely over-sized correction.

The economic downturn, too, wasn’t like a typical recession — it was a sudden, government-imposed contraction, not a natural reset as businesses worked off excess. So yes, technically the global bull market only began in March. But stocks are acting like this is Year 12 of the global bull market that began way back in March 2009. So while most pundits hype value stocks for their historical early-cycle performance, I instead see stealthy late-cycle growth stock dominance ahead — exactly what powered Chinese stocks far ahead of the world last year.

Late-cycle bull markets usually bring big returns as animal spirits push valuations higher. The more optimistic investors get, the more they pay for future earnings. World stocks got that in 1999, and I see it for 2021. Yes, that makes this a year to watch for excess. But even if euphoria arrives by this time next year, its arrival isn’t a trigger to sell. Again, euphoria usually runs for many months before it rolls into a bear market, bringing big returns as excess builds. Some of history’s greatest years played out this way. There is time … and a good time.

So stay vigilant, but don’t act prematurely and shoot yourself in the foot. Instead, enjoy 2021’s quieter global politics and a return toward normal economic life — boosting sentiment, the economy and stocks in China and globally.