By Yang Ge and Guan Cong 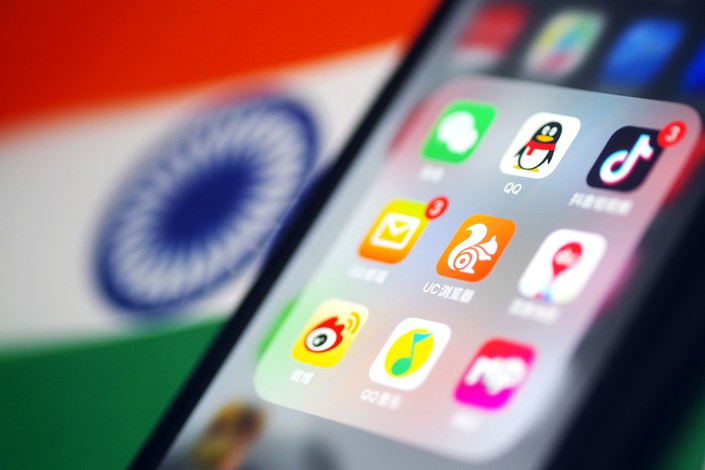 The bans have come amid broader tensions between China and India on their shared border, where one of the biggest flare-ups in years resulted in fatalities last June.

India has permanently banned a number of apps backed by some of China’s top internet companies, the country’s media reported on Tuesday, formalizing a temporary measure that was taken last year over privacy and national security concerns.

The group of banned apps had initially been accused of engaging in activities detrimental to India’s sovereignty, integrity and defense of the country, along with “stealing and surreptitiously transmitting users’ data in an unauthorized manner to servers which have locations outside India.”

The ban was made permanent after the government was dissatisfied with the app operators’ responses to a list of follow-up points it wanted clarified following the initial action, Indian media Mint reported, citing an unnamed person aware of the development. It added the notice making the ban permanent was issued last week.

A spokeswoman for ByteDance, whose hugely popular TikTok was the highest-profile app to be banned last year, would only refer Caixin to the Mint story. Leading search engine Baidu, which also had several apps banned, did not reply to a request for comment. And a spokeswoman for Alibaba, whose UCWeb browser was one of the banned apps, had no comment.

Tencent, whose popular WeChat was also in the original ban of 59 apps last year, declined to confirm whether it had been notified that the ban was made permanent. “Tencent complies with all applicable orders and regulations, and continues to adhere to applicable laws in the jurisdictions in which we operate. We look forward to continuing to focus on our core markets and providing valuable services for our users,” a company spokesman said.

Of the Chinese companies affected, TikTok was believed to have suffered the most because of its high popularity in India at the time of the initial ban, with more than 100 million monthly active users. The company’s parent, ByteDance Ltd., anticipated a loss of more than $6 billion after TikTok and some of its other apps were first banned, sources close to the company’s senior management told Caixin shortly after the action.

The Mint story quoted a TikTok statement saying the company was studying the latest notice and would make an appropriate response.

“TikTok was among the first companies to comply with the government of India directive issued on June 29, 2020,” the statement said. “We continually strive to comply with local laws and regulations and do our best to address any concerns the government may have. Ensuring the privacy and security of all our users remains to be our topmost priority.” A TikTok spokeswoman did not respond to a request from Caixin seeking to confirm the statement’s authenticity.

The bans have come amid broader tensions between China and India on their shared border, where one of the biggest flare-ups in years resulted in fatalities last June. More recently, media reported another minor clash took place last week.

Chinese apps have also come under the gun in the United States, where both TikTok and WeChat faced bans by the administration of former U.S. President Donald Trump. Two main elements lie at the heart of both countries’ concerns: privacy protection and the potential for sharing of information with Beijing.

Chinese internet companies in general have a poor record for privacy protection, and have been frequently punished by their own regulators for inappropriate use of user data. At the same time, foreign governments fear that Beijing could force Chinese-based companies to share user data from their foreign operations, something many of the companies have denied they would do.

In the U.S., the Trump administration was threatening to ban TikTok’s American presence last year unless ByteDance sold the app’s U.S. operations to a local entity. Later it backed down and appeared willing to let the company bring in local partners as major investors. Around the same time it also sought to ban transactions using WeChat in the U.S.

Both ByteDance and Tencent took their cases to the U.S. court system, arguing the bans violated U.S. laws.

In one of the latest developments, a panel of judges on the U.S. appeals court in Washington signaled skepticism in mid-December over the Trump administration’s continuing efforts to ban new TikTok downloads. And earlier this month, the U.S. Court of Appeals in San Francisco signaled it was also largely skeptical of efforts to overturn the decision of a federal magistrate judge, who last year granted a preliminary injunction to WeChat users in the U.S. who said the government restrictions amounted to an outright ban in violation of their right of free speech.

New U.S. President Joe Biden has not indicated whether he will continue to press for bans of both TikTok and WeChat in the U.S.