By Huang Rong and Anniek Bao 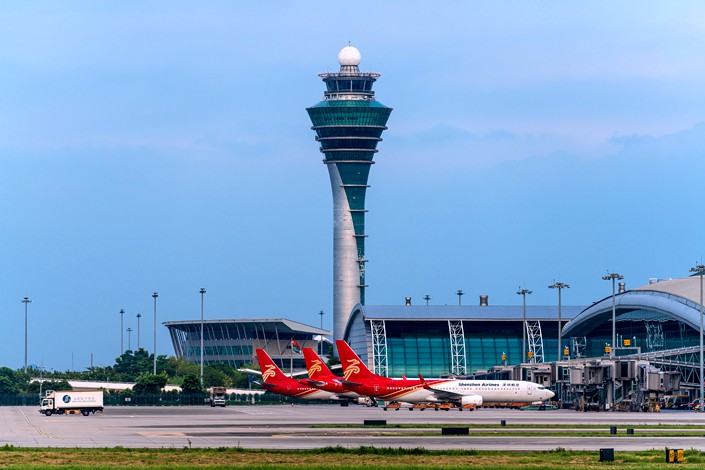 Like most of its peers, however, Guangzhou Baiyun’s passenger numbers plunged as travel restrictions and social isolation policies prevented people flying during the global Covid-19 pandemic.

Guangzhou Baiyun International Airport recorded 43.77 million passenger trips in 2020, down 40.36% from a year ago, according to its operator, the Guangdong Airport Authority (GAA).

Hartsfield-Jackson Atlanta International Airport had been the world’s busiest airport for the past 22 years due to its positioning as a hub for Delta, one of the top U.S. airlines. The sprawling airport saw its traveler volume plunge 61.17% to 42.9 million people last year.

Like most of its peers, however, Guangzhou Baiyun’s passenger numbers plunged as travel restrictions and social isolation policies prevented people flying during the global Covid-19 pandemic.

But its drop was also milder than most as China quickly got its outbreak under control, potentially setting it up to take the crown as the world’s busiest airport last year.

Of the world’s top 10 airports from 2019, Dubai, Tokyo Haneda, Chicago O’Hare and Dallas-Fort Worth have yet to report their final figures for 2020.

In a sign of China’s airline industry taking its biggest hit from Covid-19 in the pandemic’s early stages, Guangzhou’s main airport welcomed 56.2% less passengers through its terminals in the first half of 2020 as the pandemic surged globally and brought air travel to a near standstill.

But travel demand started growing in the second half as China loosened travel restrictions to boost its economic recovery and this cushioned the airport’s overall decline in passenger traffic.

But from the city-level perspective, Beijing and Shanghai both handled more traffic than Guangzhou, since each of those cities is home to two major airports, compared with just one in Guangzhou.

“Guangzhou’s rush to the top is in part due to the internal traffic distribution between the two airports in each of these major cities,” a staff member at a major airport told Caixin.

The No. 2 airports in Beijing and Shanghai — Daxing in the former and Hongqiao in the latter — handled large volumes of domestic flights that were less affected by the pandemic. By comparison, Capital airport in Beijing and Pudong in Shanghai experienced bigger downturns because they host most of their respective cities’ international flights.

Beijing airports transited 50.6 million passengers in and out of the capital last year, according to aviation data analysis CADAS, and Shanghai handled 61.7 million people.

The global airports association, Airports Council International (ACI), has not released its annual ranking of airports by passenger volume for 2020. GAA said the championing of Baiyun airport is based on statistics released by individual airports listed as the top 20 busiest airports by ACI in 2019.

However, the global airport industry has felt the pinch of the pandemic, as Tokyo Haneda Airport, the 50th busiest airport in the world in 2019 with 44.35 million passengers that year, had more traffic than any airport would do last year.