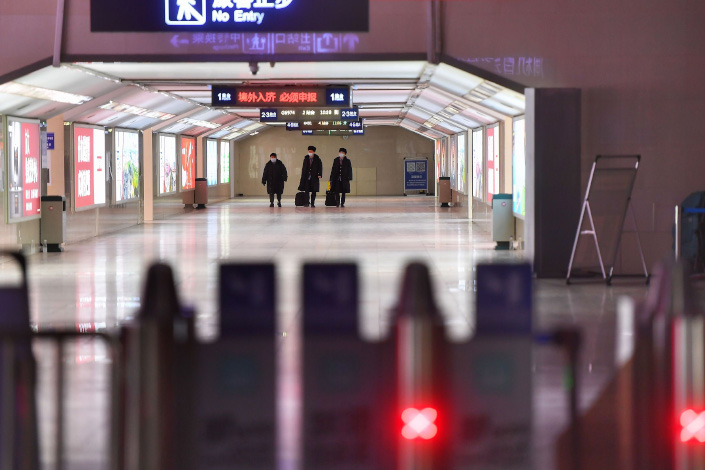 This year’s Lunar New Year travel rush, when millions of Chinese travel back to their hometowns in the world’s largest annual human migration, is predicted to be the least busy in at least 18 years.

As the country works to contain a rash of local coronavirus outbreaks, implementing measures such as Covid-19 testing requirements and mandatory quarantines, many are reluctant to travel. The government is also calling on people to stay put and “celebrate in place” (就地过年).

“It will inevitably be an off season,” a member of staff at the national railway operator told Caixin on Monday, the day before the start of the traditional 40-day rush.

There will be an estimated 1.15 billion trips made during this year’s travel rush season, Ministry of Transport spokesperson Wu Chungeng said Thursday. That would be the smallest figure recorded since the government began releasing this data in 2003. That year, 1.8 billion trips were made.

The 2021 estimate amounts to around 60% less than the nearly 3 billion journeys seen in 2019 and 20% less than last year. It’s also about a third lower than the prediction announced by the ministry last week, and the transport authority said the actual number of trips could be even lower.

Already, the number of trips taken by road, rail, airplane and boat are down about 50% from the comparable period last year, according to the transport authority. The Lunar New Year typically falls between Jan. 21 and Feb. 20 each year, but the exact date depends on the lunar cycle. This year it will be held on Feb. 12.

Top travel site Qunar said it had not seen any significant spike in train and flight tickets booked for the period as of Monday, the platform told Caixin. The number of trips being booked to some of the most populated provinces — including Henan, Sichuan and Anhui — has tumbled significantly year-on-year.

Rail operator China Railway has slashed its prediction of the number of trips by train from 407 million to 296 million.

While Beijing’s railways stations would normally be packed at this time of year, a Caixin reporter who visited one major station found that several of the waiting rooms were far from busy, and two were virtually empty.

But the lure of the annual family reunion, which for many people comes but once a year, outweighs all the warnings and inconvenience for some. “After one full year working away from home, we will go home no matter what,” one half of a married couple from Sichuan told Caixin.

On Jan. 20, the State Council, the country’s cabinet, announced that interprovincial travelers will have to present a negative Covid-19 test result from the preceding seven days, starting on Jan. 28. The announcement also urges people to practice 14 days of home-quarantine after arriving and not to attend large gatherings.

Some areas’ requirements are even stricter, requiring a negative result from the prior three days for those traveling from higher-risk areas.

China confirmed 54 new Covid-19 cases Thursday (link in Chinese), 21 less than the previous day, according to the National Health Commission (NHC). Of those, 41 infections were locally transmitted and 13 were imported from overseas.

Outbreaks persist in the northern and northeastern provinces of Heilongjiang, Jilin, Shaanxi, and Hebei, which surrounds Beijing.