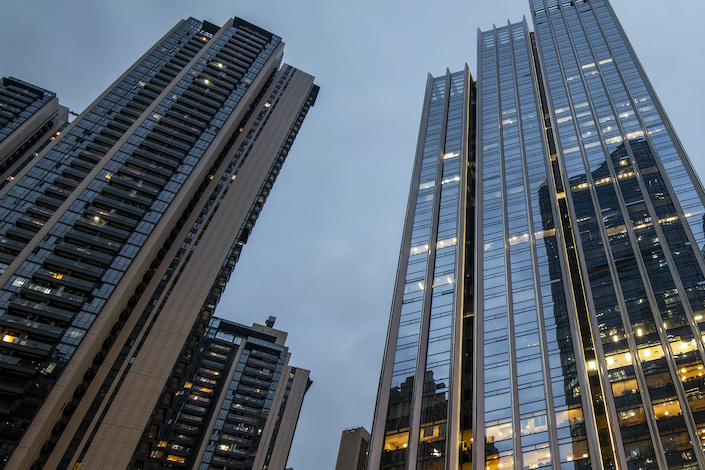 Hangzhou is one of China’s most expensive cities with average new house prices at more than 30,000 yuan ($4,600) a square meter.

Another city in China is taking restrictive measures to crack down on real estate speculation amid surging housing prices.

Housing authorities in the eastern city of Hangzhou Wednesday banned buyers of certain new homes from selling them within five years. The policy applies to newly built apartments sold through a lottery with a winning chance of less than 10%.

Despite a series of restrictions, housing prices are reaching record highs across the country. While local governments cap new home prices, certain new projects are selling at much lower prices than nearby existing homes. For certain hot new projects, tens of thousands of potential buyers enter lotteries for a few hundred units. Once they hit the jackpot, buyers can immediately sell the units at a hefty profit. The new Hangzhou policy means speculative buyers can no longer do that.

The home purchase threshold was also raised. Residents must have a local residential registration, known as hukou, for five years to buy a second home.

The new policy also plugs a loophole in which people can give houses under their names to others as gifts to become eligible to buy more houses. Now such givers can buy new properties only three years after they make a housing gift.

The capital of Zhejiang province is one of the most expensive cities in China. New houses sell for an average of more than 30,000 yuan ($4,600) a square meter, according to online real estate data provider Cityhouse.cn. In the first 11 months of 2020, housing sales measured by area climbed 20.8%, and by value, 27.2%, data from online real estate company Beike showed. The city sold more than 200 billion yuan of land last year, ranking second-highest in the country.

Across China in 2020, residential and commercial property sales measured by area climbed 2.6% to 1.76 billion square meters, and by value, 8.7% to 17.4 trillion yuan. Both figures were the highest since the data series began in 1991, according to the National Bureau of Statistics.

The residential housing market is a key driver of economic activity in China, but for the past four years the government has been conducting a campaign to control the rise in prices to prevent bubbles and rein in the amount of debt taken on by individuals and property developers. Even amid sweeping post-pandemic stimulus policies, the government has stuck to President Xi Jinping’s mantra that houses are for living in, not for speculation.

But demand for housing has remained strong, especially among those looking to buy property as an investment. Increased liquidity in the financial system brought about by the central bank’s loosening of monetary policy to support the economy has flowed through into the housing market, especially in bigger cities.

Earlier this month, Shanghai and Shenzhen unveiled policies to cool the local housing market, including a measure designed to plug a loophole long exploited by buyers using fake divorces to become eligible to purchase more properties or obtain mortgages. Shanghai will also levy a tax on sales of houses purchased within five years, up from the previous two-year barrier.