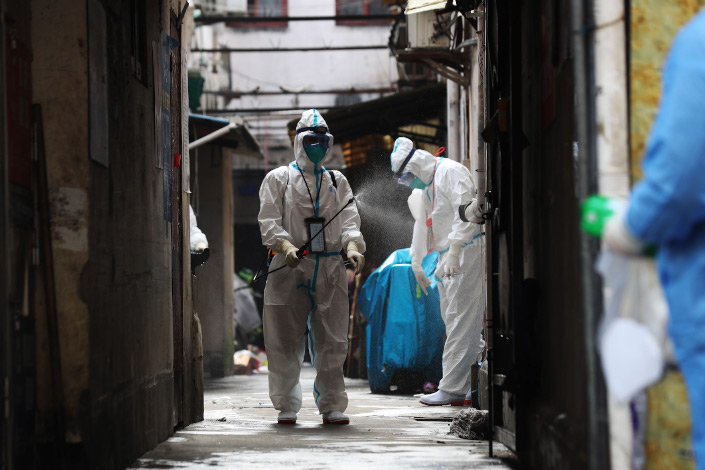 A medical worker in protective gear disinfects a residential community in Shanghai on Jan 27.

Shanghai, the world’s third-largest city with more than 25 million people, has done an exceptional job among all Chinese cities and provinces in combating the novel coronavirus with its preparedness and sophisticated response.

The eastern China financial hub was once considered one of the cities most vulnerable to the pandemic because of its status as a transportation hub and its close economic ties with Hubei province, the original epicenter of the pandemic. But Shanghai successfully limited the outbreak and was among the earliest Chinese cities to bring the virus under control.

Like the rest of China, Shanghai has faced a new wave of infections since winter fell. Over the past week, Shanghai recorded 16 locally transmitted cases, sparking fears of a resurgence.

However, without draconian measures, Shanghai again quickly contained the virus. At a press conference Wednesday, Mayor Gong Zheng declared that the latest outbreak was placed under control. Gong said the city’s success in containing the new flare-up was attributed to the early discovery of new infections and quick response.

Read more
In Depth: How Shanghai Handled the Coronavirus Better Than Most of China

The city’s emergency plan was enacted right after new cases were reported to trace contacts and differentiate people with different levels of exposure to infection risks, Gong said.

Shanghai’s approach reflected how sophisticated and targeted virus control measures can effectively contain the outbreak while limiting the impact on the general public’s normal life.

When the pandemic first hit, people with little knowledge of the virus resorted to drastic measures such as traffic reductions and lockdowns. But this also led to heavy costs from the abrupt interruption of social and economic activities.

As time passes, more flexible and scientific mechanisms have been set up across China to respond to new outbreaks in an orderly and sophisticated way. However, in the face of the resurgence, some local authorities again turned to dramatic measures, sometimes excessively.

Aggressive lockdowns and rounds of virus tests affecting millions were ordered in some places with only a few new cases, sparking public criticism over resource waste and interruption of normal life.

In Tonghua, an abrupt lockdown and lack of preparation left many residents without enough food and necessities when they were forced to stay home, exposing an emergency response failure.

In comparison, Shanghai shut down only communities with cases of infection and tested 41,000 people who were believed to have infection risks. Most parts of the city were unaffected.

Zhang Wenhong, director of the infectious diseases department at Huashan Hospital in Shanghai, described Shanghai’s virus control strategy as “catching mice in a china shop,” which requires quick but delicate movements to trap the mice without damaging anything.

Aggressive and determined response allowed China to put the virus under control earlier than most other countries, but as the battle against the virus drags on, more sophisticated and better designed measures are needed to prevent chaos and unnecessary costs.

Shanghai’s success showcases how early preparation and careful planning can deal with the outbreak in a more efficient way.

Zhang Fan is an editor of China Reform and Caixin Weekly.