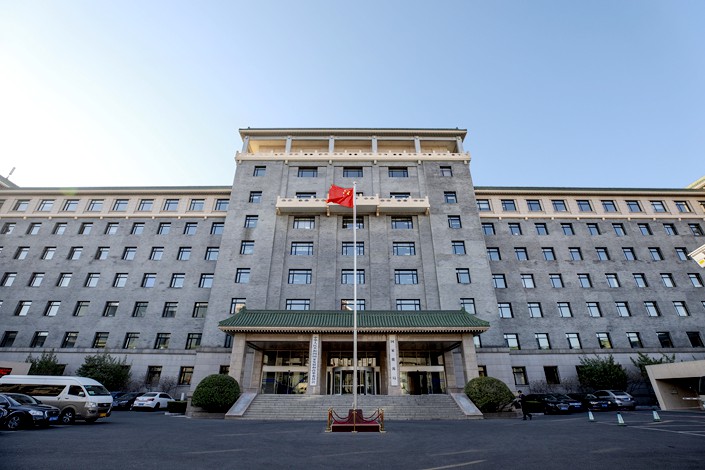 The National Energy Administration in Beijing on March 7. Photo: VCG

Chinese government inspectors have slammed the country’s energy administrator for inefficiency, environmental failures and ideological wavering, in an unusually strong official rebuke to an agency with a long history of high-profile corruption scandals.

The National Energy Administration (NEA), which oversees the country’s energy-related industries, has experienced a “deterioration of its political ecology” that has had “severe effects” on the implementation of environmental protections, according to a report published Friday by an inspection team under the State Council, China’s cabinet.

Ordering the body to “rectify” its failings, the report says the NEA has insufficiently prioritized China’s transition to low-carbon energy, has not controlled the actions of polluters in regions earmarked for improved air quality, and has inadequately enforced environmental checks and standards.

The dressing-down comes three months after the Communist Party’s internal discipline inspector opened a probe into the NEA’s deputy chief for what is likely suspected corruption, and one month before key annual political meetings in Beijing where government officials are expected to rubber-stamp a new five-year plan shaping national policy through 2025.

In a damning overview of the agency’s activities, the report (link in Chinese) by the Sixth Central Ecological and Environmental Protection Inspection Group criticizes the NEA for “not placing environmental protection high enough” on the agenda and failing to rein in the development of coal-fired power plants, which produce planet-heating carbon dioxide.

The organization’s light touch allowed new coal capacity in certain eastern provinces to grow “far in excess of local plans” and had damaged efforts to curb air pollution in key areas including a swath of China’s industrial north, the inspectors wrote.

They added that the agency was not rigorous enough in conducting approvals and checks for power plants, continued using facilities after they should have been phased out, and did not adequately link the stated capacities of certain coal facilities to environmental assessments.

Additionally, while drafting tweaks to China’s coal laws, the NEA “did not give enough consideration” to green technologies and sought to water down passages outlawing the importation, sale and use of substandard coal, as well as those that sought to hold the sector to higher environmental standards, according to the report.

Without naming them, the inspectors attacked certain NEA officials, accusing them of “believing that the most important thing in the energy sector is ensuring supply and that overly high environmental demands will increase production costs for businesses,” adding that some officials seek to shift blame for the sector’s longstanding structural problems onto other government departments and localities.

Despite making some progress on environmental protection in recent years, there are “discrepancies” between the NEA’s work and “Xi Jinping thought on ecological civilization,” the Chinese president’s instructions, and the “policies of the Party center and State Council,” the inspectors concluded.

Since its establishment in 2008, the NEA has been at the center of a number of high-profile corruption scandals, with two of its five directors to date receiving criminal convictions.

In October, the Central Commission for Discipline Inspection, the party’s internal graft-buster, said (link in Chinese) it had launched an investigation into NEA Deputy Director Liu Baohua for “suspected serious disciplinary and legal violations,” a common euphemism for official corruption.

Starting March 4 and March 5, China will hold the so-called “Two Sessions,” the largely ceremonial annual meetings between senior government leaders and the party’s rank and file. Officials are expected to approve a new five-year plan that will steer national policy through 2025.

Anticipation is running high among environmental and climate experts that the plan will include bold initial steps by Beijing toward achieving net-zero carbon dioxide emissions by 2060, a target unexpectedly announced by Xi in September.

Although researchers have outlined different roadmaps for hitting that goal, they generally agree that China must peak its carbon emissions by the end of the decade and slash them dramatically thereafter, a strategy that would necessitate a vast reduction in the use of coal and other fossil fuels that make up around two-thirds of the Asian nation’s energy mix.

By the end of January, Chinese cities and provinces home to a combined 250 million people had announced plans to peak emissions in the next five to 10 years.