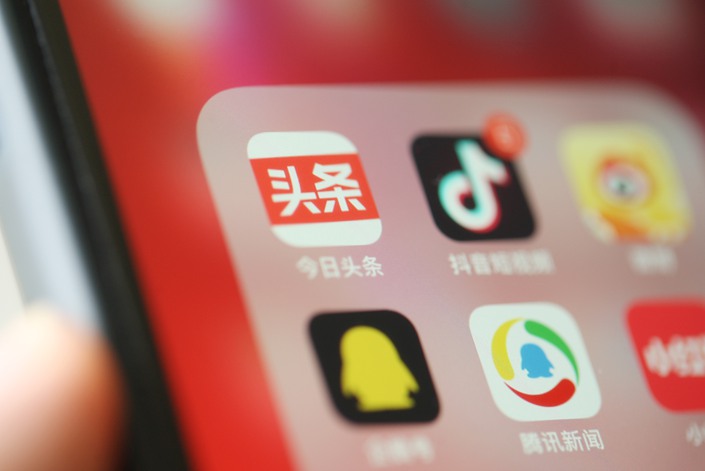 Weak rules and lax enforcement have allowed China’s economically critical internet platforms to compete in ways that are damaging to consumers.

China’s internet platforms have been exchanging fire for some time now. The ongoing conflict between social media giants ByteDance Ltd. and Tencent Holdings Ltd. has taken a new turn. Just days ago, ByteDance-owned short video platform Douyin sued Tencent for an alleged monopoly in the Beijing Intellectual Property Court. Their complaint was Tencent-backed WeChat’s restriction of video links from platforms like Douyin. In response, Tencent stated that this was a malicious false accusation, and that it would continue to prosecute its accusers for infringing on the law. Similar scenes have been staged so many times that the public is thoroughly tired of them. We sincerely hope that internet platforms can be governed out of chaos as soon as possible and that such cases can effectively advance the rule of law in China’s internet sector. Otherwise, the interests of the millions of consumers and large or small business owners who use these platforms will all ultimately suffer.

From the “war of words” to the “war of public opinions” and now the “war of lawsuits” — regardless of the involved parties’ intent, they have consumed a vast amount of public resources while attracting all this attention. Yet for all the commotion and debate, there have been few definitive results, either in terms of “gentleman’s agreements” between parties involved or generalizable rules for the industry. Legal proceedings that should have been dealt with seriously have been delayed for long periods without reaching a verdict. Verdicts in some cases, meanwhile, are not universally applicable. Sometimes the same case received different verdicts in different places. It is worth noting that there is a large degree of routinization for inter-platform conflicts. With their abundant capital, all the big platforms have dedicated talent pools and recruited experts to serve as their mouthpieces in these fights. However, by the end of each spat, nothing ever changes in terms of company behavior or business logic, to say nothing of the promotion of the rule of law in the internet sector. This ought to prompt some serious reflection.

In fact, the reasons for the frequent conflicts are complex. China’s internet sector has seen a long phase of unrestrained growth. For a time, the concept of cut-throat “wolf culture” was synonymous with the internet. At the same time, the industry lacks clear and enforceable rules, making it difficult for laws and regulations to keep pace with its development. The Anti-Monopoly Law (AML) and the Anti-Unfair Competition Law lack operability and are in desperate need of improvement. Enforcement is another weak spot, rendering the law ineffective and preventing regulation from meeting real needs. Admittedly, platform governance is a new global issue. Even defining the relevant markets for anti-monopoly management is a challenge for all countries. China has introduced some rules for internet platform governance and launched a number of regulatory measures in recent years. However, a truly effective mechanism for the external regulation and governance of internet platforms has yet to take shape. There is an ill-defined boundary between maintaining good market order and noninterference with normal competition among enterprises.

Internet platforms are a type of enterprise, but many have hundreds of millions of users, making them a kind of “infrastructure” in practice. If the inherent contradiction in the platforms’ duality is exploited to their own benefit, these enterprises will bring huge negative externalities upon all of society. When internet platforms were just starting to grow, the government took a supportive approach, even tolerating some behavior that skirted the edge of legality to ensure their success. Now the platforms are no longer saplings in need of support, however, but towering trees that can stand on their own. And if not kept in check, their free-for-all will erode business rules and ethics down past the bottom line of morality. No one knows how far the vicious competition will go.

It’s time this melee comes to an end. If government institutions, like ordinary internet users, just stand by and watch as unfair competition rages among the platforms, they can’t claim to be blameless for the results. Recently, policymakers have proposed “strengthening anti-monopoly and preventing the disorderly expansion of capital,” to which the relevant regulators have taken some measures in response. The public is waiting to see how regulators will respond to the ongoing internet platform brawl.

To stop unfair competition and strengthen anti-monopoly, they first need to line up their ideas and present society with a clear plan. Issues like “choose one of the two,” a requirement whereby brands are not allowed to be sold on competing platforms, are not new to debate. But even when regulators have intervened, there has been a lack of clear and uniform guidelines for enforcement. China’s 2008 AML took a cautious, or even evasive, approach to addressing such issues, perhaps out of a desire to leave room for innovation. Now that the internet sector’s landscape for innovation and competition has undergone substantial changes, revision of the AML has been given priority. Inevitably, the relationship between the AML and the development of the internet industry also must be revisited. Legislation should not only lay down basic principles; it should also provide specific, operable clauses. Currently, the law is poorly enforced, and violators tend to get off with a light sentence when caught. As the Central Committee of the Communist Party of China aims to strengthen the basic position of the competition policy, the question will be how to gradually implement it in the internet sector. In late 2020, the State Administration for Market Regulation released the Anti-Monopoly Guidelines for the Platform Economy Sector (Draft for Comments). As the guidelines cover several of the hot issues like “choose one of the two” requirements, big data-based price discrimination, and algorithm collusion, the industry has high expectations for their effect. Future legislation and enforcement will be focused on how to form synergy between fighting both monopolies and unfair competition.

It is impossible to manage the mess in the internet sector without daily supervision. Implementation faces some real problems — insufficient regulatory power, pressure generated by local protectionism, and inadequate management out of concerns for economic development, employment and other reasons. However, the recent precise application of administrative penalties on three mergers and acquisitions of internet platforms — that failed to declare in accordance with the law, and were implemented in violation of the law — shows that regulators are capable of making a difference. People are wondering whether this will form a complete set of mechanisms or if such regulation will not be implemented in a long-term manner. At this moment, what is needed most are cases of scientific, rigorous and responsible law enforcement and supervision that can truly establish regulatory authority and create a complete regulatory mechanism. When it comes to legal disputes on internet platforms, we have seen jurisdiction repeatedly emerge as the No. 1 problem. The jurisdictional dispute is a common corporate litigation strategy, but there is concern over the judicial system’s possible local protectionist biases. Justice is the last line of defense for social justice; it cannot be broken. Currently, the whole world is rethinking platform governance. Whether in terms of legislation, regulation or judicial practice, China must look to the explorations of some developed economies for lessons learned.

The contribution of internet platforms to China’s new economy is a universally recognized fact. It is because of their importance that effective governance is so urgently needed. For China’s internet platforms that still have a long way to go, a strict rule of law cannot only restrain them but also protect them. It’s the only sure way out of the platforms’ current imbroglio.