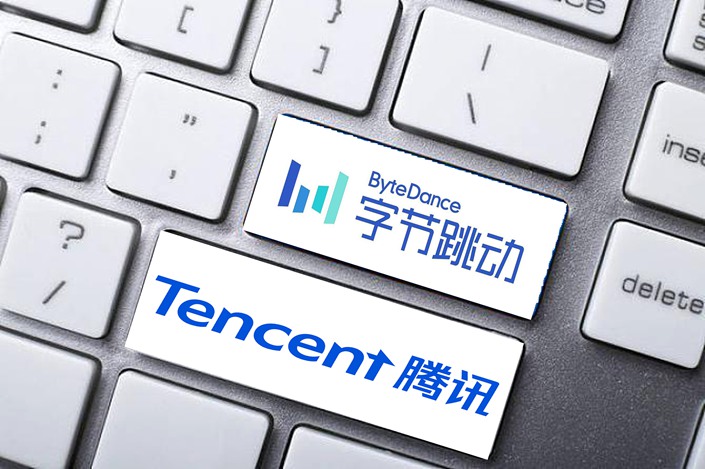 In the world of big tech, anti-monopoly regulations became yet another weapon to bludgeon the competition. Photo: VCG

A war broke out in early January between China tech giants Huawei and Tencent. The same week, another war involving Tencent got started, this time with ByteDance.

In the tech sectors, wars between giants are nothing unusual. But the conflict between ByteDance Inc. and Tencent Holdings Ltd. is essentially an issue of monopolies. It is unavoidable for the two tech giants, and epitomizes a growing problem among the internet behemoths.

In the name of antitrust

The Chinese government has been drumming up anti-monopoly legislation and regulations in recent months. Interestingly, the companies have quickly taken up this weapon to sue each other. At the end of 2020, the State Administration for Market Regulation (SAMR) released a draft of the Guidelines for Anti-Monopoly in the Platform Economy, (which went into effect on Sunday).

The document specified a number of areas that could be regarded as abuses of market dominance: red-packet subsidies, brand silencing, exclusive cooperation, the abuse of big data, search engine marketing downgrading and technical obstruction. On Dec. 14, the SAMR slapped a number of internet giants, including Tencent, with the maximum penalty under the anti-monopoly law.

Soon after, the Central Economic Work Conference, which met from Dec. 16 to Dec. 18, re-emphasized the need to strengthen anti-monopoly efforts and prevent the disorderly expansion of capital. But in the world of big business, anti-monopoly regulations have become yet another weapon to use against the competition.

Regulators have yet to make any big anti-monopoly moves, but the internet giants have long been hammering away at their competitors.

In its complaint to the court, ByteDance’s Douyin, (the Chinese twin of TikTok) decried Tencent’s de facto monopoly status, citing WeChat and QQ’s respective 1.2 billion and 600 million monthly active users as evidence of their “dominant market position.” At present, Tencent’s market capitalization is up to HK$6.95 trillion ($900 billion).

Yet ByteDance is hardly in dire straits. According to its 2020 Douyin Data Report from early January, the app’s number of daily active user surpassed 600 million in August, up 50% from 2019. By December, the average number of daily video searches had exceeded 400 million. To this day, the momentum of growth has shown no sign of slowing. Not only is ByteDance the traffic king among short video platforms; its latest market value is $180 billion, and it plans to list some of its businesses — including Douyin — in Hong Kong.

The fight between ByteDance and Tencent, both sitting at the top of China’s online traffic rankings, actually goes back to 2018, as each began encroaching on the other’s turf.

In May 2018, Zhang Yiming, founder of ByteDance, and Ma Huateng, founder of Tencent, targeted each other in scathing posts on social media. Zhang claimed that Weishi, Tencent’s own short video platform, was a copycat of Douyin. The war had officially started.

One month later, Toutiao, a news platform owned by ByteDance, published an article with the headline “Xinhua News Agency: How Many Regulation Will It Take to Stop Tencent?" which incited a heated debate and dealt a clear blow to Tencent.

Tencent soon announced that it would sue ByteDance. The feud escalated from there. Believing that Toutiao and Douyin had published or disseminated a large quantity of defamatory remarks, articles and videos against it, Tencent suspended any collaboration it had with ByteDance or its subsidiaries from its powerful WeChat platforms.

Tencent has also filed lawsuits against ByteDance platforms — including Xigua Video and Douyin — and requested the removal of user-generated video content about Tencent games, such as “League of Legends” and “Honor of Kings.”

In November 2020, Nanshan District People’s Court in Shenzhen, where Tencent is based, ruled that the copyrights to gamer-created videos of “Honor of Kings” belonged to Tencent, and not to the users who made them. It was a victory for Tencent. The court ordered Douyin to pay Tencent 550,000 yuan ($85,051) in compensation, but rejected Tencent’s other requests. Douyin said it would appeal the decision.

Soon afterward, ByteDance launched the social media app Duoshan that looked to be a competitor to WeChat, following Tencent’s launch of Weishi as a response to Douyin.

The platform economy represented by ByteDance and Tencent is the most visible business model of the digital economy. Unlike traditional business platforms, digital platforms rely on data collection and data analysis. The digital platform economy uses hardware and technology to overcome limitations of physical space and connect a wider range of people.

However, any economic entity in its emerging stage will rely on large investments to grab market share and develop customer loyalty. If the first movers, or early establishers, are too generous about letting competitors in, these latecomers can use their “late starter advantage” to leapfrog them.

By this point, you might have noticed the similarity to the U.S.’ sanctions on China — why former U.S. President Donald Trump wanted to decouple from China in technology, industrial chains and trade.

It’s the same logic, just played out in a different scenario.

To some extent, the war between Tencent and ByteDance is actually a Thucydides Trap — in which a there is a danger of war whenever an emerging power seeks to displace an established one — for the digital economy era. Although the world has no mediator to settle disputes between established and rising powers, China has and will enact more anti-monopoly laws and regulations, upon which the internet giants’ “digital economy Thucydides Trap” can shed light.

With ByteDance and Tencent as China’s undisputed internet traffic titans, the battle raging between them will certainly continue, and it is worthy of our close attention.

Song Wei is a columnist of Caixin.