By Matthew Walsh and Qian Tong 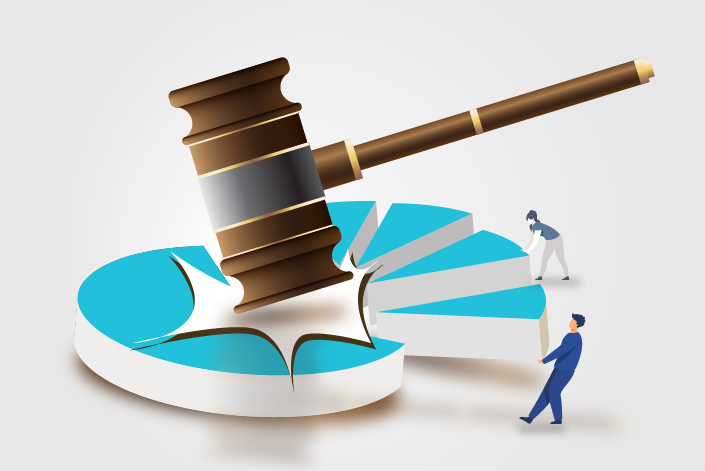 Internet behemoths like Alibaba and Tencent have constructed sprawling platforms that wield huge influence over commercial enterprises and their patrons.

A committee affiliated with China’s cabinet has issued formal guidelines aimed at reining in monopolistic behavior by platform operators, fleshing out existing regulatory powers as part of an ongoing overhaul of the country’s antitrust laws.

Platforms refer to digital business models that create value by facilitating exchanges between interdependent groups such as consumers and producers, typically allowing the platform operator to take a cut of any transactions between the parties.

The document published Sunday by the State Council’s antimonopoly committee referred generally to platform operators but didn’t identify specific names. However, many observers believe the government is preparing to tighten control over internet titans like Alibaba Group Holding Ltd. and Tencent Holdings Ltd.

At the same time, the guidelines dilute some previously proposed curbs on controversial practices such as charging variable prices to different customers for the same product.

Although the new guidelines do not differ significantly from principles contained in China’s existing antitrust laws, they could bolster the ability of regulators to publicly enforce restraints on internet platforms and “might be considered a transition from the too-tolerant and prudent approach to a ‘new normal’ approach,” said Hou Liyang, a professor at Shanghai Jiao Tong University’s Koguan Law School.

The move comes as China makes major revisions to its antitrust law for the first time in more than a decade, sparked in part by concerns that a small number of domestic technology companies have built dominant digital platforms that stifle competition.

What will the new guidelines do?

The guidelines (link in Chinese) finalize a draft proposal issued in November. They aim to prevent participants in the so-called “platform economy” from engaging in monopolistic practices, seek to promote fair competition, make regulation more effective, safeguard the legal interests of smaller parties while stimulating innovation.

The final document defines the nature of platforms, platform operators and the platform economy. It provides specifics on four types of antitrust activity, including monopoly agreements, abuse of a dominant market position, concentration of operators and abuse of administrative power to exclude or restrict competition.

Additionally, it mentions several traits common to major platform operators, such as their status as variable interest entities (VIEs), which are foreign domiciled companies whose corporate structure has unclear status under existing antitrust laws; and their use of hub-and-spoke agreements, in which platforms impose restrictions on the business activities of the smaller suppliers or retailers that use them.

How is the final document different from earlier drafts?

Although the final text is mostly consistent with the earlier November draft, there are a few significant differences.

First, the final version does not contain a provision in the draft that had laid out special conditions when a platform could be considered as engaging in monopolistic activity, even if no market in which it operated was specified.

Legal experts told Caixin the deletion may point to the importance of specifying a particular market when trying to prove monopolistic behavior, especially in cases when companies use their dominance to force their partners to work exclusively with them. In recent years, several high-profile antitrust investigations in China have collapsed because regulators have been unable to define the market in which such platforms operate.

Second, the guidelines add two phrases to help regulators decide whether the low introductory prices typically used by internet platforms to lure new users constitute predatory behavior. If platforms use such pricing strategies to “attract new users … (or) carry out promotional activities within a reasonable timeframe,” they will not be seen to have breached antitrust laws, the final guidelines state.

The final guidelines also do not contain a passage on “implementing differentiated pricing or other deals on new and old transactions, based on big data and algorithms.” Observers interpreted that exclusion to mean that platform operators may be able to continue the practice of charging different amounts to customers based on data-driven estimates of how much they are willing to pay.

Why is all this happening now?

China’s Anti-Monopoly Law came into effect in 2008, but legal experts have criticized it (link in Chinese) for being too weak to tackle abuses in the country’s rapidly developing online sector. That’s become a problem as internet behemoths like Alibaba and Tencent have constructed sprawling platforms that wield huge influence over commercial enterprises and their patrons.

For example, it is unclear whether the current law permits antitrust authorities to probe foreign-domiciled variable interest entities. Major internet players like Alibaba and Tencent have historically used these corporate structures to raise funds in U.S. markets while skirting Chinese laws preventing foreigners from owning certain kinds of China-based assets.

The uncertainty around VIEs mirrors the broader difficulties of investigating platforms suspected of acting unlawfully, with regulators electing not to investigate at least 46 unfair competition cases involving internet players filed between 2012 and 2019, according to Liu Xu, a researcher at the Intellectual Property and Competition Law Research Center of Tongji University.

What is happening in the realm of private litigation?

In recent years, a number of online platforms have launched high-profile legal bids accusing their competitors of anticompetitive behavior, though with limited success. Such private sector actions are typically one-off complaints that fail to stop longer term abuse, and fines also typically are too low to act as real deterrents.

Perhaps most notable of those is a long-running feud between Alibaba, which operates the Taobao and Tmall e-commerce platforms, and JD.com Inc., which runs an eponymous rival service.

On the day the final guidelines were published, ByteDance Inc.’s short-video platform Douyin formally filed a lawsuit against Tencent, alleging that the latter violated antitrust laws by blocking access to Douyin content on its hugely popular WeChat and QQ messaging services. Douyin is seeking a modest 90 million yuan in compensation.

Chinese leaders are poised to approve a raft of new laws and policies at key political meetings next month that will also see the government approve a new five-year plan that will shape policy through 2025. But any amendments to the Anti-Monopoly Law will not occur specifically with internet platforms in mind, said Hou.

“The amendments have been discussed for years, and the controversies around internet platforms only came out extensively at the end of 2020,” the law professor said. “Even if they are adopted next month, it is only a coincidence.”