In Depth: China’s Unfinished Fight for Mine Safety 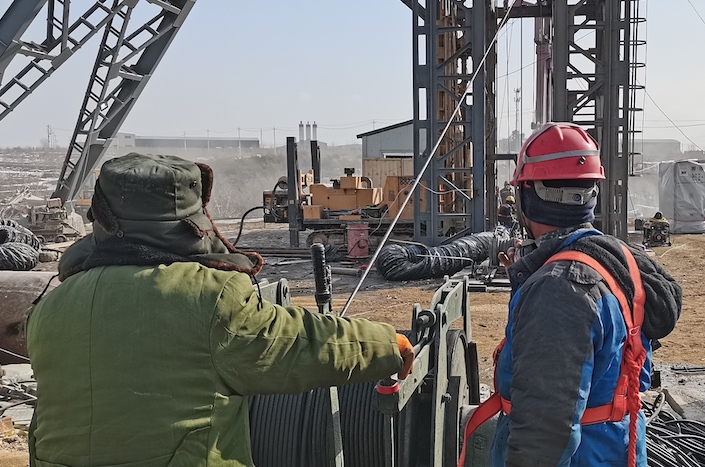 Rescue mission underway in the Qixia gold mine

A Jan. 10 explosion at a gold mine in Qixia in eastern China’s Shandong province set off a desperate search and rescue mission for trapped miners. Two weeks later, 11 of them emerged from the collapsed mine, but 10 more were found dead and another person is still missing.

The catastrophe was only the latest to strike China’s massive and still-dangerous mining industry. Authorities punished the operator of the Qixia gold mine, Shandong Wucailong Investment Co. Ltd., and removed two top city officials for their responsibility in the incident.

Mine safety, especially in the country’s giant coal mining sector, has been a major headache for decades in China, where until a decade ago small operations flourished across the country with lax safety standards and highly fragmented supervision. In 2002, the country reported a record 6,995 deaths in coal mining accidents, nearly 80% of the worldwide casualty total. That year, China’s coal production accounted for 35% of global output.

The high death rate inspired a nationwide campaign to enhance coal mining safety and crack down on substandard mining sites. By 2019, deaths in coal mine disasters plunged to 316 nationwide.

But in recent months, safety incidents in the mining sector burst back into the headlines, sparking fresh concerns over risks in the industry. Several mining incidents were reported over the past six months, including three deadly disasters that caused 44 deaths, 43 injuries and eight missing.

Officials linked the recent rise in mining catastrophes to a production rush after pandemic shutdowns. Recent increases in mineral prices also encouraged many small mining sites to aggressively expand production, they said. Thermal coal contracts rose to 752.6 yuan ($117) per ton as of Dec. 10, up more than 31% higher from October.

In response, Qixia city authorities launched an inspection of the local gold mine to examine and eliminate potential risks, a local newspaper reported. But 26 days after the inspection, the deadly explosion occurred. The cause of the incident is still unclear, and investigations are underway.

Industry analysts said the surge in recent incidents underscores that China’s battle against mining safety risks is unfinished even after years of crackdowns on mining practices that resulted in significant progress. Lingering flaws in mining operations, negligence in safety and lax oversight continue to cost workers’ lives, they said.

While special attention has been paid to coal mines over the past decade, safety supervision of other mines has lagged behind, experts said. In 2000, China set up the National Coal Mine Safety Administration to oversee coal mine operations, but there was no designated agency to supervise noncoal mines.

Several industry sources said the consolidation of oversight will give the regulator greater power and independence in supervising safety issues in the mining industry.

Tougher punishments are also expected to help China’s fight against mining disasters. The latest revision to the country’s Criminal Law, which will take effect March 1, added new articles to address responsibilities and punishments for mine safety violations.

Mine safety has improved remarkably in China in recent decades thanks to stricter regulations and improvement in mining technologies. Government data showed that China reported 434 mining incidents in 2020, down 65.3% from 2015, with 573 deaths, a decline of 63.4% over the same period.

For all that, the persistence of deadly incidents indicates uncorrected flaws in China’s mining industry, said Li Ping, a work safety official in Hunan province.

The Yuanjiangshan coal mine disaster in November in Hunan is an example. Flooding trapped 13 miners for several days, requiring mobilization of dozens of rescuers. According to official reports, the mine was involved in illegal operations since 2011. Even though mine operators were punished, production was not called off until the mine flooded as a result of mining beyond the permitted depth — which had been going on for some time.

Safety responsibility for China’s coal mines is shared by state supervisors, local regulators and mine operators. The National Mine Safety Administration as the top regulator has the power to investigate disasters and oversee local governments’ performance in meeting safety requirements. Local regulators are generally responsible for monitoring mines’ everyday operations and carrying out spot checks.

In 2019, a government safety inspector was sentenced to three years in jail for negligence after a coal mine explosion in Guizhou killed seven people.

Safety risks also thrived amid coal mine consolidations, experts said. A government push to eliminate small and substandard mining sites encouraged industrywide mergers and acquisitions, but many of the deals didn’t lead to effective consolidation, leaving a supervision vacuum and unchecked safety risks, according to Li.

Based on statistics from the National Mine Safety Administration, illegal mining activities were a factor in 15 of 25 major disasters in 2019. These included mining past allowed depths and areas, mining with expired certifications, over-stretching production capacity, counterfeiting drawings, giving false reports and failing to report.

Such illegal activities were found not only among small and midsize privately owned coal mines but also in large state-owned coal mines. According to the Chongqing Municipal Emergency Management Bureau, workers at Songzao coal mine in Chongqing, where a deadly fire occurred in September, reported a number of risks to management — including the boss — but were ignored. Sixteen people were killed in an incident when sparks caused by friction set off an explosion.

At a news conference Jan. 11, Hu Haijun, a safety commissioner with the National Mine Safety Administration, said that to enhance safety control, major executives of mining companies should be held accountable. Hu also suggested establishing a whistle-blower system that would reward the reporting of legal and regulatory violations from within mining enterprises. This would help in the investigation and punishment of serious violations in a timely manner while efficiently identifying and removing latent risks, all in the public eye, he said.

Improving oversight of noncoal mines is also in urgent need, experts said. According to official data, China has around 32,000 noncoal mines, 86% of which are small mines equipped with outdated facilities. About 960 of the mines have annual production capacity of less than 300,000 tons.

In a 2019 report, the MEM said despite efforts to push forward closure of substandard mines for safety concerns, the situation hasn’t seen significant improvement.