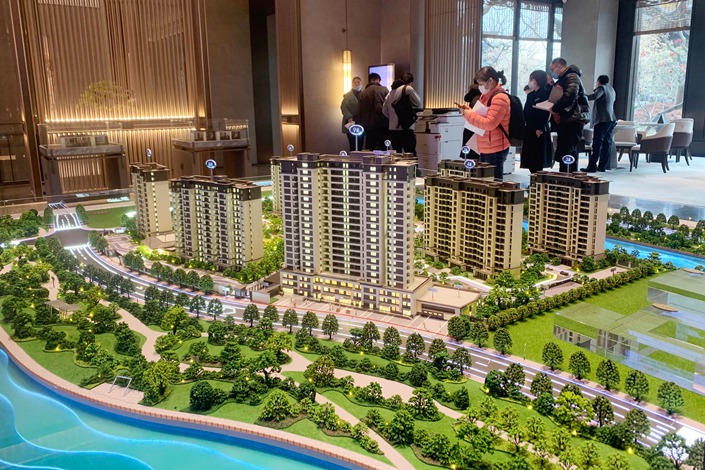 Home mortgage rates rose for the first time in more than a year in February as the government continued its efforts to curtail lending to the real estate industry in an effort to stave off risks to the financial system.

In February, the average interest rate on loans to first-time homeowners increased 4 basis points from the previous month to 5.26%, while the average mortgage rate on second homes increased 3 basis points to 5.56%, according to a report released Saturday by online financial service platform Rong 360.

It was the first increase in either of the two rates in 13 months, according to Rong 360 data.

The company’s February report was based on data collected from Jan. 20 to Feb. 18 from 674 branches of 66 banks in 41 cities across China. By comparison, in January 2020, the average interest rate on loans to first-time homebuyers was 5.51%, while that for buyers of second homes was 5.82%, Rong 360 data showed.

The increase in rates came after the People’s Bank of China and the China Banking and Insurance Regulatory Commission issued new rules on Dec. 31 designed to cap lending to the real estate sector, including consumer mortgages and bank loans to developers.

The new rules (关于建立银行业金融机构房地产贷款集中度管理制度的通知) (link in Chinese), which took effect on Jan. 1, stipulated that all domestic banks’ outstanding property loans as a proportion of total loans, as well as their ratio of outstanding mortgages to total loans, should both be capped under a five-tiered system.

Specifically, for China’s big four state-owned banks, along with the China Development Bank, Bank of Communications Co. Ltd. and Postal Savings Bank of China Co. Ltd, the ratio of outstanding property loans to total loans would be capped at 40% and outstanding mortgages as a proportion of total loans would be capped at 32.5%, the authorities said.

According to a research report released Thursday by Huachuang Securities Co. Ltd., at the end of June, Industrial and Commercial Bank of China Ltd., Bank of China Ltd., China Construction Bank Corp. and Postal Savings Bank of China Co. Ltd. all exceeded their limits on the ratios for outstanding mortgages to total loans.

The caps are a major reason mortgage rates are edging higher. Average mortgage rates in 18 of the 41 cities increased from January to February, while those in five cities declined, according to the Rong 360 data showed. The rest remained unchanged.

The Rong 360 report pointed out that the rates of mortgages issued by foreign-owned banks remained unchanged from January to February, indicating that the regulators’ lending caps were behind the average rate increases because the new rules only apply to domestic banks.

Denise Jia and Luo Meihan contributed to this report.