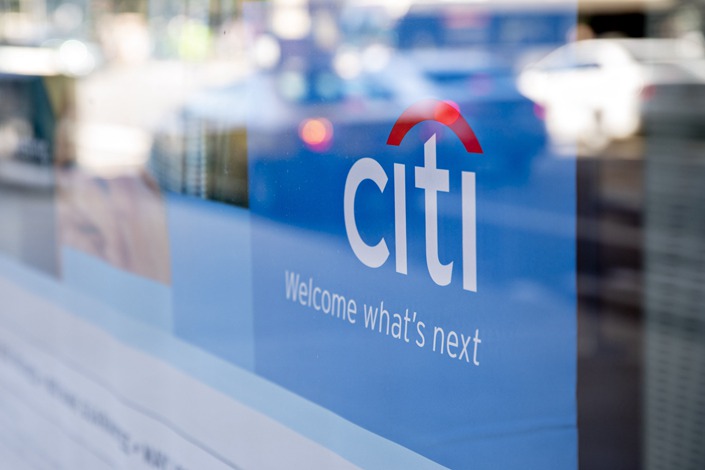 Signage is displayed in the window of a Citibank branch in Chicago, Illinois, U.S., on Oct. 12, 2019. Photo: Bloomberg

(Bloomberg) — A man in a tuxedo sits at a mountaintop bar. His phone buzzes and he springs into action, stepping into ski boots and racing down the slopes. He is Buckley, Darren Buckley, head of consumer banking for Citigroup China, and also the star of the bank’s James Bond-inspired marketing campaign.

“We are a highly regulated business, but it doesn’t mean we can’t be fun,” Buckley said in an interview. After doing his first spot in June, “I said, you know what, why don’t we play around with this.”

Having a senior banking executive star in a dozen online ads marks the most recent unconventional bid for attention by a financial services firm eager to make an impression on China’s emerging investor class. Fund managers and research analysts have launched live streams, banks and brokerages have been slashing fees and offering free gifts, all in an effort to stand out in a crowded marketplace.

Citi’s marketing team came up with a video to attract the online audience, and Buckley volunteered. The 20-second video posted on June 4 garnered 2.3 million views in a week.

“There were so many comments,” said Buckley, including users who complimented Citi and those who said he looked like Bond. During one prolific Saturday, he wrote eight little scripts and sent them to his marketing team.

Citi is one of 100 banks, including foreign rivals like HSBC Holdings PLC and Standard Chartered PLC, pitching Chinese consumers, many of whom already have a card from one of the country’s state-owned banks. As of June, 2020, the top 20 Chinese banks controlled 99% of China’s credit card issuance, according to Dong Zheng, an independent researcher who has covered China’s credit card industry for over two decades. That leaves the private institutions to scrap over the remaining 1% or to persuade shoppers they need a second or third card.

For Citi, the world’s largest credit-card issuer, cards are seen partly as a tool to attract affluent new customers and then to sell them other services. The assets controlled by China’s wealthiest people are expected to double from 2019 to 116 trillion yuan ($18 trillion) by 2025, according to UBS Global Research.

“Wealth management is the crucial battleground for financial services firms in China, be it local or foreign,” said Zhang Xiaoxi, a Beijing-based analyst at Gavekal Dragonomics. “You need to find your niche and differentiator. Credit cards could be a starting point.”

The popularity of phones and social media has also given new reach to overseas institutions, which have only a tiny physical presence compared with China’s massive state banks.

Citi’s viral videos promote its Prestige Card, which requires applicants to have at least 30,000 yuan of monthly income. Sign-up incentives include more than 500,000 bonus points or fancy carry-on luggage. Those perks are nice, Dong said, but they don’t stand out.

“To get their attention, you need the visual elements on social media — which is quick, powerful and widespread in China,” he said.

So far, Citi’s campaign has gotten plenty of feedback, generating applause online and compliments from customers and institutional clients. Coca Cola’s Greater China and Korea President Curt Ferguson joined in for one of the videos. When Buckley spoke at a recent conference in Shanghai, other participants jokingly called him James Bond.

More importantly, the bank’s local wealth business has grown despite the pandemic. Buckley credits Douyin and other social media campaigns with bringing in new users, and the number of clients with more than $1 million in assets at the bank grew 60% in 2020.

Meanwhile, Buckley hasn’t been able to persuade his boss, Citigroup China head Christine Lam, to play M in the Bond series. The marketing team outside China is yet to embrace the strategy for a global audience.

“At this stage, they don’t know what to make of them,” said Buckley, a 28-year veteran of the bank. “They like them. They’re surprised by them. Maybe one day they’ll start using them.”