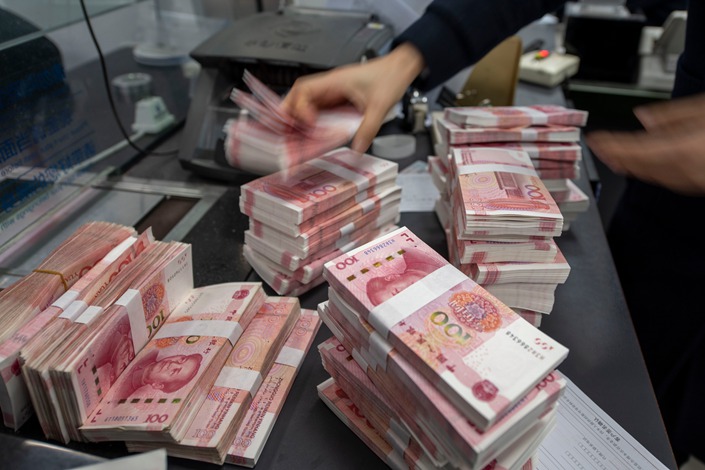 Some banking industry participants told Caixin they are concerned that the new rules could make it harder for many regional banks to do business. Photo: IC Photo

China’s financial regulators have dealt a fresh blow to banks and fintech companies that jumped into online lending, imposing tougher rules that have the potential to crimp the growth and scale of their credit business.

The notice (link in Chinese), published by the China Banking and Insurance Regulatory Commission (CBIRC) on Saturday, tightens oversight of banks’ online lending through measures including a ban on the provision of credit by regional banks to customers outside the jurisdiction covered in their company registration. The commission set an overall limit on online loans issued by banks in cooperation with third parties as a percentage of their total credit, and stipulates limits on their total exposure to joint lending. It also mandates that in any joint loan, the other institution must provide at least 30% of the capital.

The notice marks the latest effort by financial regulators to strengthen supervision of online financing carried out both by traditional commercial banks and fintech giants like Ant Group Co. Ltd. in order to ensure lenders properly manage and control the risks involved in the business. The CBIRC said the notice was issued in response to problems encountered in the implementation of interim measures (link in Chinese) published in July 2020 that deal with how banks should operate their online lending businesses and cover issues such as risk management, data management, and loans issued jointly with other institutions.

Some provisions have been tightened and fall into line with those issued in draft rules put out in November that restrict the operations of online microlenders and are targeted mainly at companies like Ant Group and the financial arms of tech giants Tencent Holdings Ltd. and JD.com Inc.

For example, in the July regulations, banks are told to “cautiously” carry out cross-regional online lending without imposing limits, while the latest notice bars the practice outright. But online-only banks without physical outlets will be exempt from the restrictions.

“The fundamental role of a regional bank is to base itself in the local market and serve local customers,” the CBIRC said in an explanation (link in Chinese) of the notice posted on its website. “However, in recent years, some regional banks have taken advantage of internet technologies to expand their reach, seriously deviating from their base and expanding blindly and in a disorderly manner, leading to large risks and hidden dangers.”

However, the CBIRC has not given a definition of “local customers,” which has given rise to confusion. One banking industry insider told Caixin it’s not clear whether a customer is defined as local based on their current residence, the location of their household registration — also known as their “hukou” — or their identity card number.

The central bank addressed the problem of local banks taking online deposits outside their jurisdiction in February when they prohibited regional lenders from accepting deposits from non-local customers. That followed a ban on banks marketing fixed-term deposit products on third-party online platforms in January.

The notice also sets out three quantitative indicators, absent in the interim measures, which banks must comply with in online lending where loans are granted jointly with another institution. The CBIRC said the limits are aimed at guiding banks to ensure their cooperation with other institutions is done prudently.

For any joint loan, a bank should contribute no more than 70% of the capital and its partner should contribute no less than 30% — mirroring the limits set out in November’s microlending rules. A bank’s outstanding joint online loans with one individual partner and its related parties cannot exceed 25% of its Tier-1 capital, a measure of financial strength, while its outstanding joint online loans should not exceed 50% of its total outstanding loans.

Some banking industry participants told Caixin they are concerned that the new rules could make it harder for many regional banks to do business. “Now, (cross-regional online) deposits and loans have been both blocked,” a source at one privately owned bank told Caixin.

The 30% requirement and the cross-regional ban go into effect on Jan 1. 2022, giving banks almost a year to prepare for the new regulations and ensure they are in compliance.