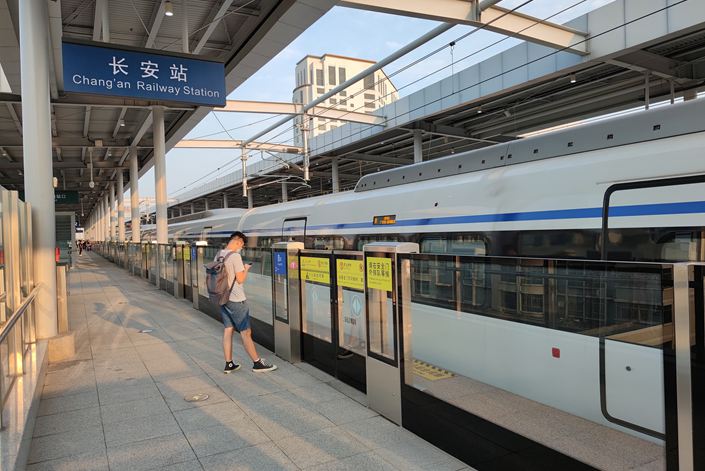 The cities of Guangzhou and Shenzhen will link their subway systems with a new 31.4 kilometer (19.5 mile) line, becoming the fourth major rail connection between two of the country’s wealthiest metropolises in South China’s Guangdong province.

The creation of Line 22, with trains capable of going up to 160 kilometers per hour (kph), would also mark the latest step in Beijing’s plans to create a Greater Bay Area centered on the Pearl River Delta, which includes Hong Kong and Macao.

The new rail plan announced on Wednesday was first detailed in a Guangzhou traffic master plan issued in 2016, covering development from that year through 2022. The line itself would run at a hybrid of slower speeds through denser urban areas with more stops, and higher speeds in the more suburban, less densely-developed areas between the two cities.

In connecting Shenzhen and Guangzhou, the new line will pass through the city of Dongguan — one of China’s earliest major manufacturing hubs due to its proximity to Hong Kong. Actual stops, including the terminuses of the line, are still in the planning stages.

The line will complement three existing rail connections linking Guangzhou and Shenzhen. The oldest of those is a railway line that went into service in 1911, and whose trains can currently travel up to 200 kph. A new high-speed rail connecting the two cities launched in late 2011 with trains running up to 350 kph. And a third rail line was launched in late 2019 running from Guangzhou to Shenzhen’s airport, with speeds of up to 140 kph. A second high-speed rail line is also being planned.

The link is the latest step in Beijing’s efforts to integrate the various major Pearl River Delta cities into a major economic hub. A roadmap for the Greater Bay Area’s development was unveiled in February 2019 by the State Council, China’s cabinet, aiming to transform the area into a world-class city cluster to rival famous bay areas in Tokyo, New York and San Francisco.

The area consists of nine cities in Guangdong along with Hong Kong and Macau, and is home to 68 million people. It accounts for less than 1% of China’s territory and 4% of its population but generates nearly 10% of national gross domestic product, or $1.58 trillion in 2017, about the same as South Korea or Russia. China hopes to turn the area into a global technology innovation center and finance powerhouse with advanced manufacturing and modern services industries.