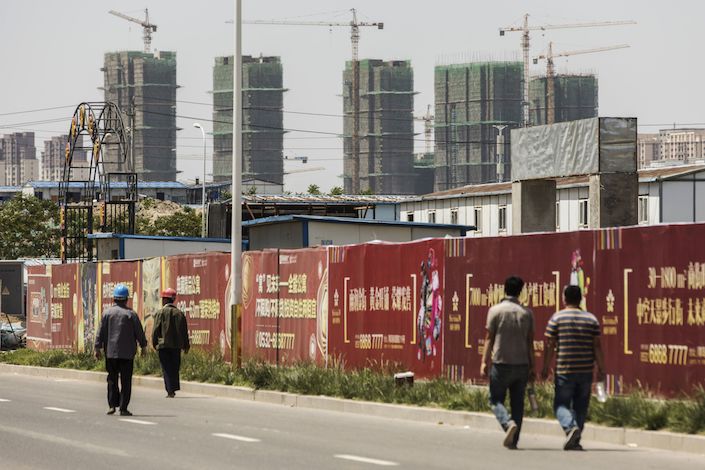 A gauge of 33 major Chinese builders, mostly listed in Hong Kong, jumped as much as 9.5% Thursday, the most since 2015, according to data compiled by Bloomberg. China Vanke Co.’s Hong Kong-listed shares surged as much as 17%, the biggest jump since its 2014 listing. China Resources Land Ltd., China Overseas Land & Investment Ltd. and Country Garden Holdings Co., among the nation’s 10 biggest developers, were the best-performing constituents of the benchmark Hang Seng Index.

The share price surge came after news that Qingdao, one of the biggest cities in the eastern province of Shandong, and Tianjin, a port city in the north, have adopted a new land bidding regulation that some analysts say will help large developers snap up land and gain market share, squeezing smaller players.

Qingdao will limit the number of land auctions this year to three, instead of holding multiple smaller-scale sale events throughout the year, according to a Wednesday statement on the website of its land regulator. The new rule is to implement requirements from the nation’s top land regulator, it said. Tianjin released a similar rule internally Tuesday, according to a report by The Paper. Calls to Tianjin’s land authority went unanswered.

The rules may curb land premiums and improve margins, aiding state-backed builders with strong funding capacities, Zhongtai Securities analysts including Chen Li wrote in a note. His view was echoed by Citigroup Inc. analysts led by Griffin Chan, who said in a report Thursday that the policy will lead to “higher requirements on land deposit and cash flow management” and hence it will benefit cash-rich developers.

The policy is designed to further stabilize land prices, and that should in turn help cool the current home-buying frenzy, according to a report by China Index Holdings analysts. Land values in China jumped about 20% in January from December amid heavy demand for premium parcels auctioned by local governments, according to China Real Estate Information Corp. China’s home-price growth also accelerated last month as low inventory stoked a fear of missing out among buyers, even as authorities widened curbs.

An uneven distribution of land parcels for auction by local governments has been a factor behind the recent surge in land prices in some cities. In January, all four land parcels in the eastern city of Hangzhou, near Shanghai, were auctioned at the upper end of prices set by local authorities due to limited supply in the fourth quarter.

Worried about bubble risks, Chinese authorities have taken a series of steps to cool land and housing prices, with the latest measures including limiting bank lending to the sector. Guo Shuqing, chairman of the China Banking and Insurance Regulatory Commission, in December called real estate “the biggest gray rhino” financial risk for China — referring to a large yet overlooked threat.