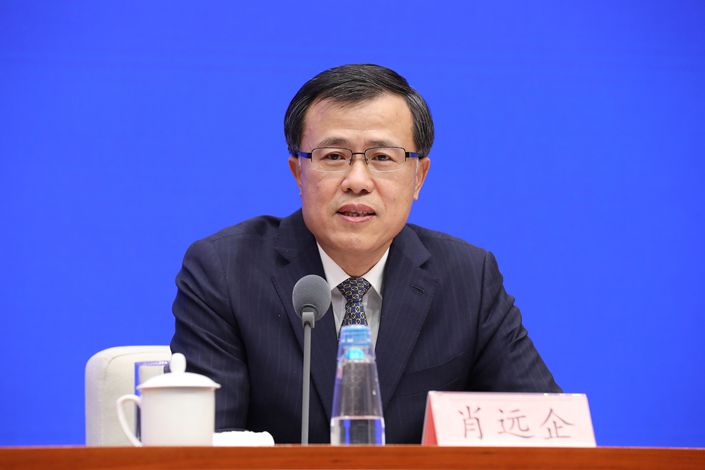 China’s top banking and insurance regulator has promoted its Chief Risk Officer Xiao Yuanqi to be its vice chairman, sources with knowledge of the matter told Caixin.

Xiao has been working in the new position since February, according to the China Banking and Insurance Regulatory Commission’s (CBIRC) website, though it didn’t update his profile until late Thursday.

While he was chief risk officer, Xiao also served as a CBIRC spokesperson and head of its general office.

A veteran regulator born in 1966, Xiao had worked in a variety of positions at the People’s Bank of China and at the now-defunct China Banking Regulatory Commission (CBRC), which merged with the country’s insurance regulator to form the CBIRC in 2018.

As a banking regulator, he had been in charge of overseeing joint-stock banks, city banks and large state-owned banks. Also, he had headed a department at the CBRC that set rules for banks’ prudential operations.

Xiao studied in the U.K. from 1998 to 1999 and got an MBA from Cranfield University. Afterward, he worked for the Monetary Authority of Macao.

The CBIRC now has four vice chairmen and one chief inspector, with Guo Shuqing being the regulator’s chairman. The profiles of two former vice chairmen, Huang Hong and Zhu Shumin, were removed from the regulator’s website Thursday as both had turned 60 years old in 2020 and needed to retire.

In the Chinese government hierarchy, Xiao is now an official on a level equal to a vice minister. In recent years, the banking and insurance regulator has rarely promoted an official to such status from inside the organization.

As the CBIRC’s chief risk officer, he had talked a lot about defusing and preventing financial risks. In a briefing (link in Chinese) earlier this year, he said the regulator had been continually alarmed by growing risks from shadow banking activities. He also warned that banks’ nonperforming loans could rise in the future.

Wu Yujian and Liu Caiping contributed to this report.