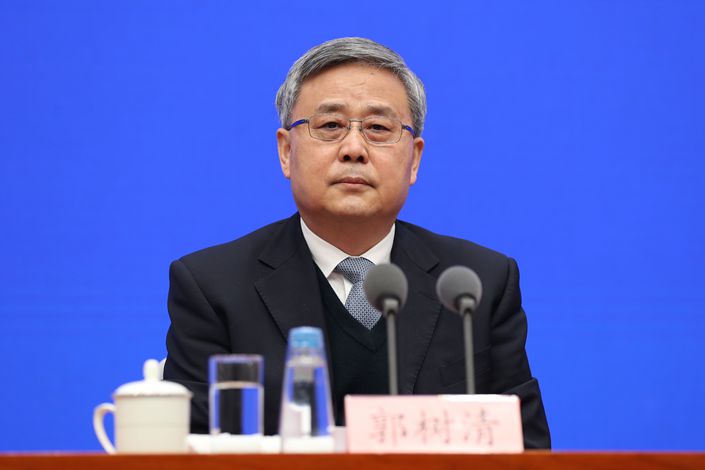 Europe, the U.S., and other countries are starting to see some of the adverse effects of the lavish government spending and extremely loose monetary policy they employed in the wake of the pandemic, the head of one of China’s top financial regulators said Tuesday.

Financial markets in the U.S. and developed European countries are performing well, but their real economies are not, said Guo Shuqing, chairman of the China Banking and Insurance Regulatory Commission (CBIRC). “Financial markets should reflect what’s actually going on in the economy. When there’s a big gap, there are going to be problems,” Guo said at a press conference (link in Chinese) about the current state of the banking and insurance industries.

“Therefore, we are very worried about the financial markets, especially that the bubble in foreign financial assets could one day burst,” he said.

At the press conference, a reporter asked if Guo was concerned about imported inflation. Guo said foreign capital has increasingly flowed into China as the economy has recovered and asset prices are attractive in the country, Guo said. Meanwhile, Chinese authorities are studying how to manage the inflows to prevent them from causing turbulence in the domestic financial market.

As one of the countries that got its domestic coronavirus outbreak under control, China has seen its economy steadily recover momentum since it lifted its lockdowns. The world’s second-largest economy kept its monetary policy relatively steady last year: It did not adopt zero or negative interest rates or other unusual stimulus policies such as quantitative easing.

China was the only major economy to report an expansion, while the U.S. and Europe estimated that their GDPs shrank in 2020.

Guo forecast that China’s lending rates will likely go up this year. His prediction is confirmation that the country’s monetary policy stance is tightening, which is appropriate given that the economic recovery is on track, said Zhang Zhiwei, chief economist at Pinpoint Asset Management Ltd.

Guo also warned about a bubble forming domestically in China’s real estate market. He said many homebuyers are buying homes as speculative investments rather than as places to live in, which has the potential to disrupt the economy if prices should start to fall and homebuyers find themselves unable to repay their mortgages.

Last year, Guo said that real estate is the biggest “gray rhino” in China. In January, as it laid out its key tasks for 2021, the CBIRC pledged it would strictly implement a new bank loan management mechanism, which was recently rolled out, to cap bank lending to the real estate industry. The regulator also said it would strictly supervise key property developers to ensure they followed new fundraising rules announced in August.

At the Tuesday press conference, Guo also commented on fintech, saying internet platforms in the financial businesses must comply with the same capital adequacy requirements as traditional financial institutions.

China’s financial regulators have stepped up scrutiny over fintech companies to curb systematic risks following the abrupt suspension in November of Ant Group’s highly anticipated IPO. In response to a media question about Ant Group’s role in the domestic financial market, Guo said that all kinds of financial businesses, no matter what form, should be subject to the appropriate laws and regulations.