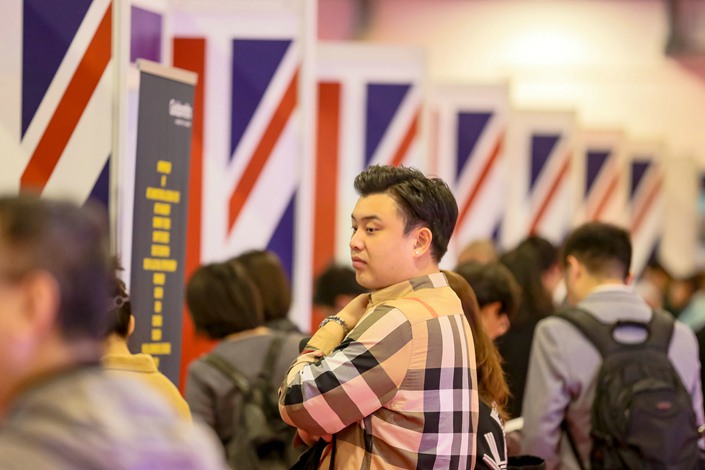 The number of Chinese students looking to study at British universities is growing, while demand for places at U.S. or Australian colleges appears to be weakening. Photo: VCG

Increasing numbers of Chinese students are opting for undergraduate study at British universities amid the Covid-19 outbreak, according to the latest applications data, while their interest in U.S. and Australian universities has declined sharply.

Data released by the Universities and Colleges Admissions Service (UCAS) shows that more than 25,000 Chinese students have applied for admission to U.K. undergraduate programs starting later this year, a significant increase of 21% over last year.

The total number of international students applying to study in the U.K. has also risen significantly. As of Jan. 15, there were 616,360 international applicants to U.K. undergraduate programs, an increase of 8.5% over the previous year.

Due to the impact of the pandemic, international travel remains challenging, while concerns about the effectiveness of online classes and tuition fee reductions loom large for international students.

Since last year, British universities and the government have been offering chartered flights to pick up international students and extending work visas for graduates in a bid to attract them.

While the total number confirmed Covid-19 cases in the U.K. continue to rise, though at a slower pace than in late 2020, a series of public health policies have given positive signals to international students on the sidelines. According to the BBC, the U.K. announced a four-stage “unblocking” plan on Feb. 22, hoping to completely lift virus control measures by June 21 this year at the earliest.

More than 20.7 million people in the U.K. have received the first dose of the Covid-19 vaccine as of March 2, according to official data, while more than 895,000 people have had their second dose.

By contrast, the number of Chinese students applying to study in the U.S. has registered a yet another sharp decline.

According to data from Common App, a platform that supports applications to more than 900 U.S. colleges and universities, the number of Chinese students who had applied to begin an undergraduate course this year as of Jan. 15 was down by 18% to 18,296.

Statistics from the U.S. State Department show that the number of Chinese students being granted new F-1 student visas — which cover the whole period of study, and are also provided to students at the masters and doctorate level — has sharply declined since 2016, when a decade of growth came to a halt with a 45% year-on-year decline to 148,000 visas.

This decrease is related to Australia’s “closed door” policy since March 2020 which prevents applicants from China from obtaining visas and transportation to attend Australian schools.

An education agency in Beijing told Caixin that due to the impact of the epidemic, many students who originally wished to apply to schools in the U.S. switched to the U.K. The increasing number of applicants and a limited number of places has also made competition extremely fierce.