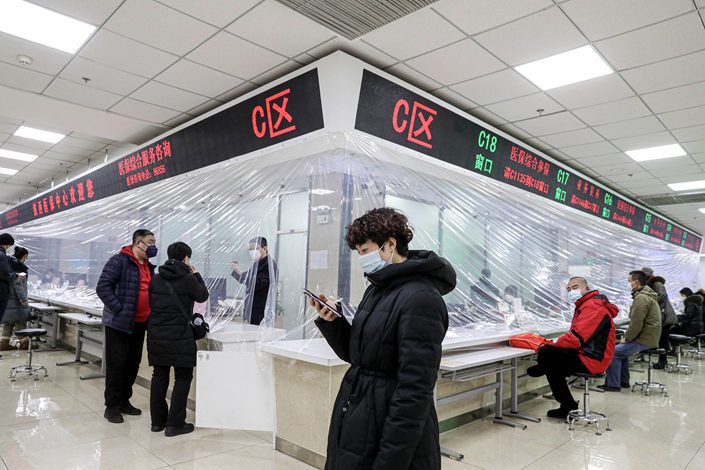 Although authorities have been reassuring the public that pensions will be paid in full and on time, experts have expressed concern about the sustainability of the pension funds as the working-age population’s share of the total continues to shrink.

The shortfall highlights the costs of one aspect of China’s Covid-19 relief effort last year, as the country’s social insurance system took a financial blow at a time when experts were already worried about its long-term sustainability.

Even taking into account nearly 2.1 trillion yuan ($137.1 billion) in government subsidies, the social insurance funds disclosed a shortfall of 621.9 billion yuan for last year, after reporting a surplus of 841.1 billion yuan in 2019, official data show.

The funds’ combined revenues fell 13.3% in 2020 while expenditures rose 5.5%. The fall in the revenues was due to a temporary policy that reduced company contributions to the funds by over 1.5 trillion yuan, according to government data.

To make up for shortfalls, some regional pension insurance funds for enterprise employees received a combined 50 billion yuan in subsidies from the National Social Security Fund (NSSF), the report said. It was the first time that the budget report showed the NSSF paying subsidies to the social insurance funds since the reserve fund was set up in 2000.

On Friday, the Ministry of Finance delivered the budget report to the annual plenary session of the National People’s Congress, China’s top legislature. With the cut to corporate contributions already rescinded, the ministry projected in the report that the social insurance funds’ revenues will rise 23.7% this year, leaving them with an annual surplus of 276.8 billion yuan.

In China, provincial-level governments run their own social insurance funds for pensions, health, unemployment, work-related injury and maternity. Contributions mostly come from individuals and companies, plus additional funding in the form of government subsidies.

The NSSF acts as a reserve to make up for potential pension shortfalls as the Chinese population ages. It is funded by fiscal revenue, transfers of state-owned capital and profits from its own investments.

Although authorities have been reassuring the public that pensions will be paid in full and on time, experts have expressed concern about the sustainability of the pension funds as the working-age population’s share of the total continues to shrink.

In a 2019 report, state-backed think tank the Chinese Academy of Social Sciences said China’s pension fund balance could be depleted as soon as 2035.