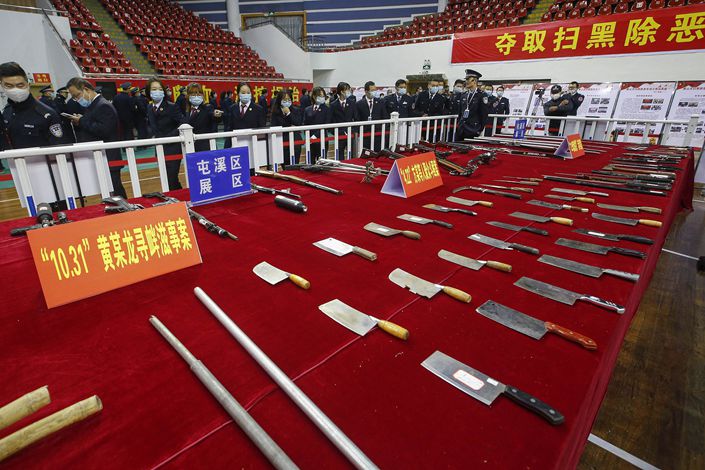 Tools and other objects used to commit crimes sit on display on Dec. 11 at an exhibition of anti-gang activities in Huangshan, East China’s Anhui province. Photo: VCG

Chinese courts concluded tens of thousands of cases involving a total of more than 220,000 individuals as part of a three-year crackdown on organized crime, the head of the country’s Supreme People’s Court said Monday.

Delivering his work report at major annual political meetings in Beijing, Zhou Qiang said China’s justice system wound up 33,053 such cases involving 226,495 people since the start of the campaign.

The courts closed more than 99% of cases involving criminal gangs and issued “severe” criminal punishments to 34.5% of the perpetrators, Zhou said. In November, Guo Shengkun, the secretary of the Central Political and Legal Affairs Commission, said China had shut down as many “mafia-like organizations” since 2018 as it had in the previous decade.

The announcement brought the curtain down on the campaign. Guo said in January that the end of the crackdown would lead to the “normalization” of the fight against organized crime.

In the past three years, judicial authorities confiscated 137 billion yuan ($21 billion) in illegal income and closed 2,668 cases in which public officials had given protection to criminal gangs, Zhou said.

Also on Monday, Zhang Jun, the head of China’s public prosecutor, said in his work report that the agency authorized the arrest of 149,000 people and prosecuted 230,000 during the campaign, 54,000 of whom belonged to mafia-like organizations. The figures represented a 12-fold increase on the previous three years, he said, without being more specific.

In his speech, Zhou also addressed the wrongful convictions of Zhang Yuhuan and He Xuegang, who were both released from jail last year after serving lengthy sentences.

Zhang Jun said prosecutors had issued opinions on accountability for wrongful convictions and had initiated procedures in recent years to find those responsible. “Correcting mistakes does not end with state reparations, and accountability must fall to the responsible entity,” he said.

In October, Zhang Yuhuan received record state compensation of 4.96 million yuan for wrongfully serving 27 years in prison. The sum was around one-quarter of what he initially applied for.

He Xuegang walked free in September after 26 years of wrongful incarceration. He has applied for 11 million yuan in compensation.