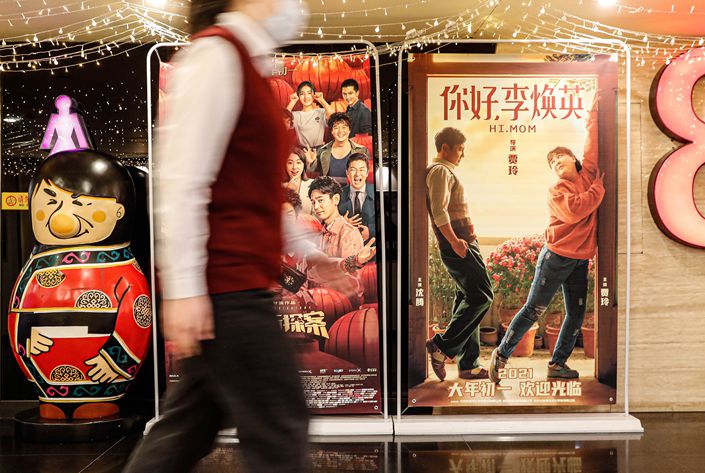 “Hi, Mom,” the top film of the Lunar New Year holiday, has overtaken the animated fantasy “Nezha” to become the second-highest earning movie ever on the Chinese market, with sales of 5.1 billion yuan. Photo: VCG

China’s post-Lunar New Year box office slump was stronger in 2021 than in previous years, but those who’ve stuck around have helped propel a time-travel comedy about a mother-daughter relationship to become one of the best-performing movies in the country’s history.

In the first week after the weeklong holiday that ended on Feb. 21, cinemas saw box office takings slump nearly 70% from the previous seven days, followed by a 59% drop the next week to 696.2 million yuan, ($106.8 million) according to data from the film administration. That compares to 5.57 billion yuan in the peak week.

That drop-off was far faster than in 2019. In that year, the two weeks after the holiday saw sales decline 45.6% and then 53.4% week-on-week, from 5.9 billion yuan during the peak week around the holiday. There isn’t a comparable figure from 2020, as cinemas nationwide were shuttered due to the Covid-19 epidemic.

“Hi, Mom” (你好，李焕英), the top film during the holiday, has overtaken animated fantasy “Nezha” to become the second-highest earning flick ever on the Chinese market, with sales of 5.1 billion yuan. The 2017 patriotic action smash hit “Wolf Warrior 2” is still in first place with its record 5.68 billion yuan. Directed by female comedian Jia Ling, “Hi, Mom” hit 5 billion yuan of sales faster than any other film in history — 22 days and 7 hours — according to an Alibaba-backed movie industry analyst.

The blockbuster tells the story of a woman who feels she has disappointed her mother, and is then transported back in time to a year before her birth. Unlike the 1985 hit movie “Back to the Future,” where the lead character tried to ensure his own existence by leaving the past intact, the central character in “Hi, Mom” tries to alter the past to give her mother a better life without herself.

The story is loosely based on the life of Jia, who plays the central character and made the film as a tribute to her mother who passed away in 2001.

But “Hi, Mom” gradually gained momentum on strong word of mouth. It received an 8.1 rating on the popular Douban review site, versus a more mediocre rating of less than six for “Detective Chinatown 3.” Riding that momentum, “Hi, Mom” overtook its rival in daily sales by the fourth day of the break.

The movie accounted for more than half of the nation’s total box office for the week from Feb. 15 to Feb. 21. By last week that had fallen to just over 38% of Chinese ticket sales, a slice worth 267 million yuan. It remained No. 1, with the second spot changing hands from “Detective Chinatown 3” to action black comedy “Endgame.”

Domestic movies overshadowed Disney’s new film “Raya and the Last Dragon,” which debuted in the country last week but finished in fifth place with 54.7 million yuan of sales.

Anticipation is building among movie-lovers for the April 23 Chinese release of “Nomadland,” which won best drama at the most recent Golden Globes awards. Its director, Beijing-born Chloé Zhao won best director at the ceremony, making her the first Asian woman and second-ever woman to take that title.