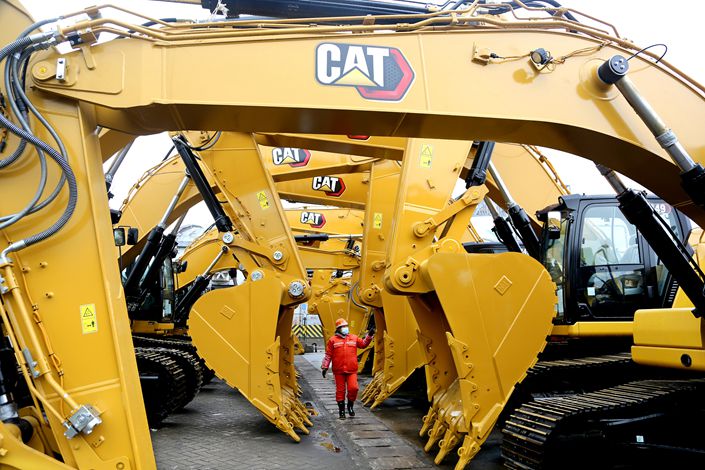 Sales of excavators in China usually pick up one week after the Lunar New Year holiday as projects resume. Photo: VCG

China’s 26 major construction-equipment makers saw sales jump in February to the highest level for that month in four years, beating market expectations as businesses roared back after a subdued Lunar New Year vacation meant people could quickly return to work.

Total excavator sales spiked 205% year-on-year to a total of 28,305 units last month, with domestic sales climbing 256% year-on-year to 24,562 units, according to the China Construction Machinery Association (CCMA) on Tuesday.

The combined figure was well above a forecast for 22,000 units by state-run industrial magazine Construction Machinery and Equipment. Excavator sales are often viewed as an indicator of the health of the country’s economy due to their close association with the infrastructure and real estate sectors.

The extent of the jump was partly due to the low base at the same period last year. Covid-19 almost brought China’s economic activity to a standstill in early 2020, with machinery-makers selling fewer than 10,000 excavators last February according to the CCMA.

However, the government’s campaign to encourage people “stay put” during the seven-day national holiday to curb potential coronavirus flare-ups also helped accelerate the resumption of business after the vacation, a report by the Zheshang Securities said.

Sales of excavators in China usually pick up one week after the Lunar New Year holiday as projects resume, a rise that lasts for about a month. In the first two months of 2021, the 26 major Chinese machinery-makers sold a combined 47,906 excavators, up 149% compared with the same period last year, according to the CCMA.

China’s producer price index (PPI), which measures changes in prices of goods circulated among manufacturers and mining companies, picked up 1.7% in February, marking the biggest year-on-year increase in 12 months, data from the National Bureau of Statistics indicated Wednesday. The mining subindex rose 6.8% year-on-year.

Machinery-makers remain optimistic about the industry’s future, partly buoyed by stricter pollution emission standards published in December last year. The policy will ban production and sales of gas-guzzlers including excavators that fail to meet the new standards starting Feb. 1 next year, forcing users to replace their old machines.