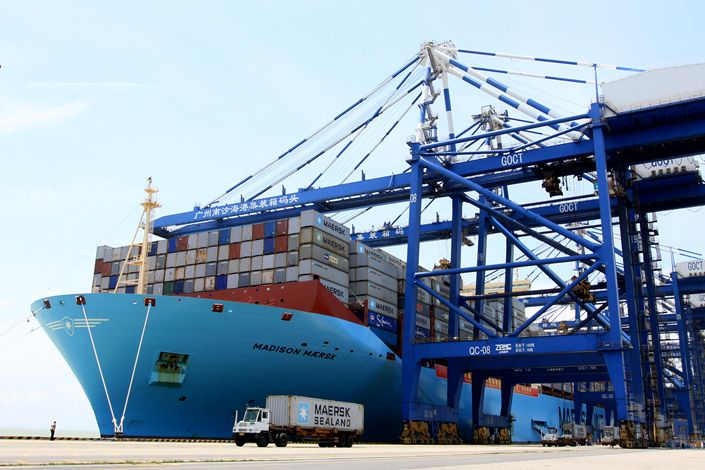 Orders for new cargo vessels and containers have surged in the first two months of this year, as the world’s major shippers rush to cash in on soaring demand for freight along routes in the Pacific Ocean, buoyed in part by strong exports from China, according to global shipping services provider Clarksons.

As of March 1, global shipyards had received orders for 66 new container ships so far this year, representing 2.45 million in revised gross tonnage and driving up the total demand for containers to 530,000 twenty-foot equivalent unit (TEUs) at a cost of over $4.6 billion, according to data on Clarksons website published on Tuesday.

“Sea freight on the Pacific routes has continued to boom since the second half of 2020, partly buoyed by China’s robust exports, making renting an empty container difficult despite the surging freight rates,” a Clarksons analyst told Caixin on condition of anonymity.

China’s exports jumped 60.6% in dollar terms in the January-February period, partly due to a low base last year, but also on soaring global demand for products ranging from electronics to medical equipment, as the U.S. economy, the world’s biggest, rebounds from the downturn brought by the pandemic.

The recent jump in demand continues a trend that emerged in the fourth quarter of 2020, when orders were placed for 61 new container ships, the highest quarterly volume since the last three months of 2015, data from shipbroker Braemar ACM indicated.

Hong Kong-based Seaspan Corp., the world’s biggest independent charter operator, has announced orders for 31 new cargo ships since December, with an addition of 379,000 twenty-foot containers, the equivalent of roughly 35% of the company’s existing fleet capacity, according to a statement statement from earlier this month.

Indicative of the rebound in global trade, spot rates in the Shanghai export container market rebounded in the second half of 2020 from a low ebb caused by the Covid-19 pandemic. The Shanghai Containerized Freight Index, which reflects the overall status of trade along routes between Shanghai and Europe, the Mediterranean as well as U.S. West Coast, rose to a historic high of 2,783 at the end of last year.

Leasing rates for container ships have also risen on demand. It cost China Cosco Shipping Corp. Ltd., the world’s leading shipping company by capacity, $38,000 every day in January to lease a cargo ship carrying 80,000 containers, while the price tag was $12,000 a day for the same type of vessel in June, according to a freight broker who spoke to Caixin on condition of anonymity because they are not authorized to talk to the media.

Despite the increased costs, the company is still raking in the cash. The group’s listed arm, Cosco Shipping Holdings Co. Ltd. (601919.SH), on Tuesday reported its best financial performance in 12 years, taking advantage of booming sea transport despite winning fewer orders in the first half of 2020. It has deployed 40 more ships with nearly 200,000 containers since May to meet the demand, increasing its total capacity by 7%.