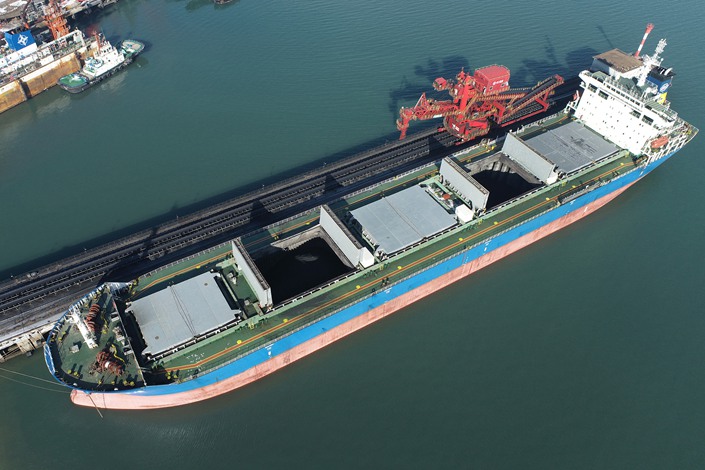 A freighter loaded with coal sits at the port on Dec. 31 of Lianyungang in East China’s Jiangsu province. Photo: VCG

China’s domestic sea freight industry is getting welcome relief from a backlog of orders as factories close for the Lunar New Year holiday, reducing demand for commodities such as coal and metals.

A weekly indicator tracking domestic shipments of commodities, including oil, coal and grain, fell to 995.77 in the week ending Feb. 5 after topping a two-year high of 1,400 last month, its publisher, Shanghai Shipping Exchange (SSE), reported. The latest reading was down 5.9% from a week ago.

Among products tracked by the China Coastal Bulk Freight Index, the coal and grain transport subindexes led the decline with drops of 7.4% and 6.4%. The subindex for metals fell 5.4% and for refined oil dipped 1.6%.

The easing shipping backlog loomed in advance of the weeklong national holiday that starts Thursday, SSE said in its weekly report on Feb. 6. It added that factories have closed ahead of schedule in some parts of China due to virus control measures and reduced power demands from industry.

Another factor impacting shipments during the month has been warmer weather, which has reduced the demand for heating in parts of the country, according to the report. A La Nina weather phenomenon sent a wave of cold air across China in winter, driving up electricity consumption and even forcing some governments in central China to impose limits on nonresidential power use.

Read More
In Depth: Why the Lights Are Going Out in China

As coal shortages eased during the month, index publishers tracking the commodity also resumed issuing their daily updates on Monday. The three major coal price index compilers had suspended their services in December when prices spiked, a move viewed as a sign of government control.

Some shipping capacity has been left idle, and low-price deals are common, the report warned. But an analyst at SSE forecast that the price cutting won’t last long, as power demand is likely to pick up after the holiday because of a strengthening export market.