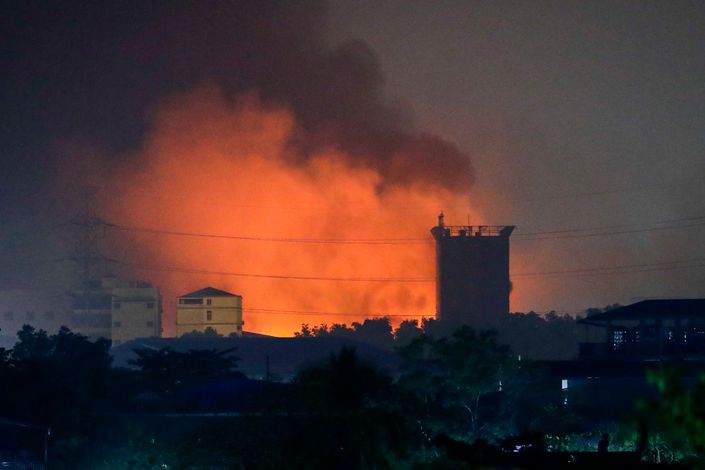 Burning factories light up an industrial neighborhood on the outskirts of Yangon, Myanmar, on Monday. Photo: The Paper

The Chinese Embassy to Myanmar urged the Southeast Asian country’s government to take effective measures to stop violence and punish attackers after dozens of Chinese-invested factories were vandalized at an industrial zone in the city of Yangon.

The embassy confirmed that as of Monday, a total of 32 Chinese-invested companies have been attacked, causing damages worth about 240 million yuan and leaving two Chinese employees injured, according to state media reports in China.

Most of the targeted companies are textile and clothing factories, located in the Shwe Lin Ban Industrial Zone in the northwest of Yangon, the country's largest city and its former capital.

“China urges Myanmar to take further effective measures to stop all acts of violence, punish the perpetrators in accordance with the law and ensure the safety of life and property of Chinese companies and personnel in Myanmar,” the Chinese embassy said in a statement (link in Chinese) Sunday.

China also called on the people of Myanmar to express their demands in a lawful manner and not to be incited or used in a way that undermines Sino-Myanmar ties, according to the statement.

The attacks occurred on Sunday afternoon when dozens of Chinese clothing factories were smashed and set on fire by an unknown number of individuals at the industrial zone, Chinese media reported.

Carrying iron bars, axes and gasoline, the attackers assaulted security guards and set fires at the entrances to several factories and in several warehouses, China’s national broadcaster CGTN reported. Vehicles and nearby shops were also vandalized.

The incidents came amidst the domestic turmoil after Myanmar's military deposed the country's ruling party, the National League for Democracy (NLD) on Feb. 1 and declared a year-long state of emergency. The coup ended joint military-civilian rule in the country.

In mid-February, China’s ambassador to Myanmar, Chen Hai, said in an interview with local media that political turbulence in the country is “not at all what the Chinese side wishes to see,” adding that Beijing has “friendly relations” with both Myanmar’s armed forces and the NLD.

Some demonstrations outside the Chinese embassy in Yangon appeared to be fueled by claims that Beijing is helping the military regime. “We understand (the protestors’) calls, and our work pushing for peace and dialogue reflects their legitimate demands,” Chen said.

Zhao Lijian, a spokesman for China's foreign ministry, said Monday during a press conference in Beijing: “We hope parties in Myanmar will remain calm, exercise restraint, act in the fundamental interests of the people, strive to resolve differences through dialogue and consultation within the constitutional and legal framework, and continue to advance democratic transition.”

Zhao explicitly declined to respond to a question about whether China would evacuate Chinese nationals that reside in its Southeast Asian neighbor. He only said the Myanmar side should protect Chinese citizens and warned Chinese nationals about safety, but didn’t directly answer the question.