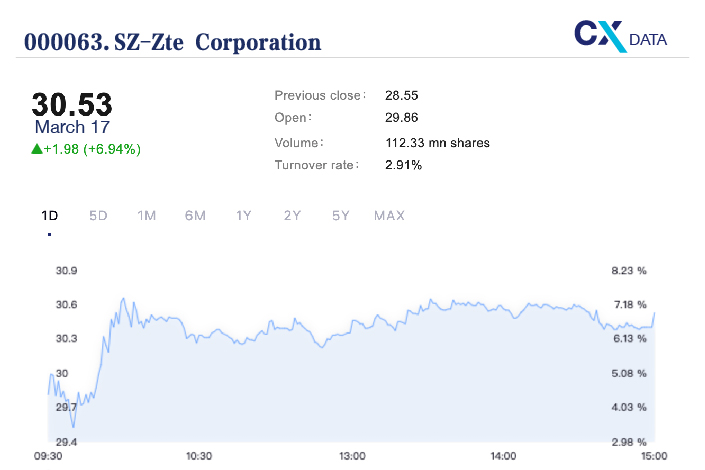 Overall revenue jumped 11.8% to 101.5 billion yuan ($15.6 billion) in 2020, according to its financial report released Tuesday. Expansion was recorded across ZTE’s three main business segments — carrier networks, government and corporate, and consumer — with most growth coming domestically and in Asian markets, as sales in the U.S. and Europe actually declined.

The company made over two-thirds of its revenue from the China market, up from slightly less than 65% last year, and 14.5% came from other Asian markets. The proportion coming from Europe and the U.S. slipped to 13.6% last year, a significant drop from 25.1% in 2017.

This has been in part due to stringent sanctions placed on the company by Washington in early 2018, when it was put on an economic blacklist that barred it from doing business with U.S.-based firms after violating the country’s sanctions on Iran. The company was removed from the blacklist after paying a $1 billion fine and putting down another $400 million as a guarantee against potential future violations.

Its business of supplying mobile carriers with network equipment, which contributed over 70% of revenue, experienced a modest 11% growth to 74 billion yuan last year, down from 16.7% in 2019.

ZTE did not disclose how many 5G gear contracts it signed last year in the financial report, though its performance in the first half was lackluster. In its report for the first six months of 2020, it revealed it had signed a total 46 commercial contracts for the next-generation network technology by the end of that period. By contrast, its rival Ericsson had secured 131 contracts by early 2020, Nokia had sealed 101 by the first three quarters of last year and Huawei had won 91 as of February.

In part that recovery was due to a barrage of U.S. restrictions on its biggest domestic rival Huawei Technologies Co. Ltd., over alleged links to the Chinese government.

ZTE was once a major player in the smartphone market, but has in recent years fallen off its perch amid fierce competition. In 2012, it had about a 4% share of the global market, which fell to less than 1% in 2019, according to industry research firm IDC.

The Shenzhen-based company saw a 17% year-on-year decline in profit to 4.26 billion yuan, in part due to swollen research and development (R&D) costs. The company dedicated 14.8 billion yuan to R&D, 17% more than last year.

On Wednesday, the company’s Shenzhen shares closed up 6.94% from the previous day, while its Hong Kong stock finished the day 7.39% higher.

In January, ZTE announced it was selling a 90% stake in wireless communication unit Caltta Technologies Co. Ltd. for 774 million yuan. The company expects the deal to bolster its first-quarter profit from 1.8 billion yuan to 2.4 billion yuan, in what would be as much as 208% year-on-year increase.