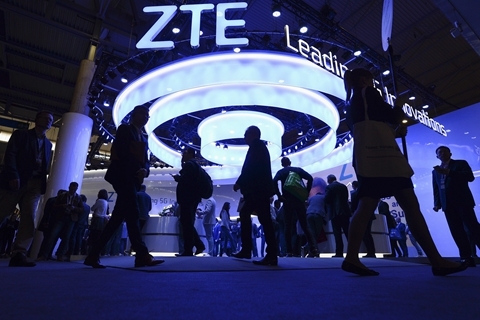 Nearly a year after being thrown into crisis during a high-profile clash with the U.S., telecom equipment maker ZTE Corp. is still in recovery mode as it tries to sharpen its focus under newly installed leadership imposed under a settlement with Washington.

ZTE was one of China’s biggest high-tech success stories, but it ran afoul of the American government earlier this decade for selling U.S.-made products to Iran in violation of American sanctions. The two sides settled that dispute in 2017, but Washington determined last year that ZTE had violated the deal and punished ZTE anew by cutting off the company from its U.S. suppliers last April.

The CFO of ZTE rival Huawei Technologies Co. Ltd. is currently being sought for extradition from Canada to the U.S. to face similar charges unrelated to the ZTE case.

ZTE ultimately settled its own case a second time last July, including paying a $1 billion fine and agreeing to completely replace its top management. At the height of the crisis, ZTE ceased most operations and said its viability was in doubt. The company has been in a state of rebuilding ever since reaching the new settlement, executives said at a Wednesday shareholders meeting in its hometown of Shenzhen.

Chairman Li Zixue said that following a difficult second half of 2018, ZTE is in a “slowing-down mode.” The company’s strategy hasn’t changed and will focus on “recovery, development and excelling,” the chairman said.

ZTE’s business selling smartphones into the important U.S. market, mostly through tie-ups with local carriers, took a particularly large hit during the crisis, said President Xu Ziyang. The company was the fourth-largest brand in the U.S. before the crisis, controlling about 10% of the market, according to Counterpoint Research. But it dropped out of the top four after losing access to critical U.S. suppliers, and its share of the market plunged by more than half.

“Our U.S. business has definitely taken a relatively big hit,” Xu said at the event. “Our business in the U.S. is now in a stage of observation and recovery. We have recovered our cooperation with individual carriers, but this recovery process takes time.”

ZTE is resuming an earlier strategy of reviewing its many business units and operations in a wide range of countries, pulling out of noncore areas that don’t show a strong case for future profits and growth potential.

“Our (smartphone) business will strategically focus on key, mainstream models, locked on several key markets, finding some markets with good potential for cooperation, such as Germany and Mexico,” Xu said. “In places where we are losing lots of money, we will resolutely stop our development. There must be a business model for us to go in.”

Lost business during the crisis and the large U.S. fine put a major crimp in ZTE’s finances from which it is still recovering. The company’s cash and cash equivalents plunged by more than half to 12.3 billion yuan ($1.8 billion) in last year’s third quarter as it struggled to stay afloat. The company got some relief in September when it reached a deal to sell land and property assets for at least 2.2 billion yuan to cope with its liquidity crisis.

CFO Li Ying said the second half of last year was difficult, but the company now has adequate cash flow and backing from financial institutions. ZTE previously estimated it would post a loss of 6.2 billion yuan to 7.2 billion yuan for all 2018, reversing a 4.6 billion yuan profit in 2017.

In its other core area of telecom equipment, ZTE will stay focused on new 5G networks and looking for opportunities connected to the global migration from current 4G systems to 5G, executives said. The company had 5G-related relationships with 30 carriers at the end of February and has rolled out its first 5G phone, which will be ready for mass production in the second quarter.

“In the process of switching from 4G to 5G, there will definitely be opportunities presented by the changing market,” Xu said. “We will draw on our past experience and training to build off our 5G foundation.”

Corrects an earlier version of the story to reflect that difficult period was in second half of 2018.