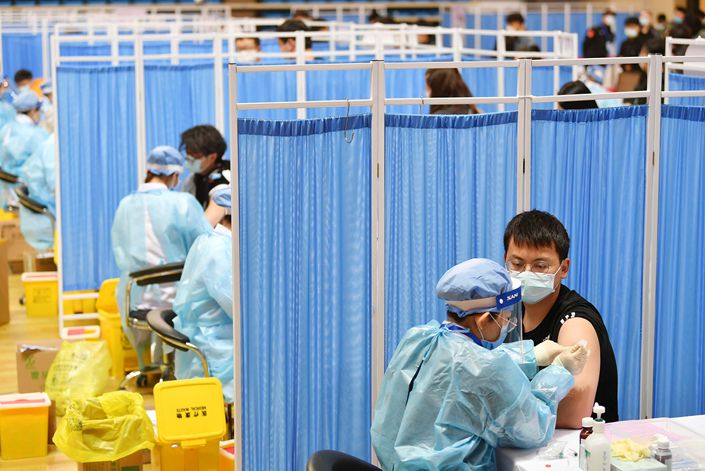 China had administered nearly 75 million doses of coronavirus vaccine by the end of Saturday, the country’s health ministry said Sunday, as the world’s most populous nation looks to speed up its sluggish inoculation drive.

The figure represents a 15% increase on the number of doses given by the end of the previous week, but accounts for a far smaller proportion of the total population than many developed nations, including the U.S. and the U.K.

Under the unlikely scenario that each vaccine recipient in China has received a single shot, roughly 5.4% of the population would now have some level of immunity against the virus, according to Caixin calculations.

By contrast, around 25% of people in the United States and 41% of people in Britain have received at least one dose, according to public health bodies.

Mao Junfeng, a deputy chief of the consumer products industry office at the Ministry of Industry and Information Technology, said at a Sunday press conference that China’s vaccine production capacity had “risen by a great extent” since the start of February, but did not give specific data.

The government had dispatched teams to help vaccine manufacturers draw up plans to expand production while ensuring “stability” in the supply, Mao said.

Current production plans will make China “completely able to satisfy” national demand for vaccines by the end of the year, Mao added. In January, the head of the China Association for Vaccines, an industry group, said the country planned to increase capacity to 1.8 billion doses by the end of 2021.

Vaccine developers are “accelerating” research to obtain sufficient safety and efficacy data from clinical trials to begin inoculating people over 60 “on a large scale,” said He Qinghua, a top inspector at the health ministry’s disease control bureau.

Some regions have already begun inoculating healthy people over 60 based on “full evaluations of their health status” and “their risk of being infected,” He added.

Select groups of seniors in some parts of China, including the capital Beijing and the island province of Hainan, have been able to get Covid-19 vaccines since late February, according to local public health bodies.

For now, China will not provide quarantine exemptions for inbound travelers who have already been vaccinated, said Feng Zijian, a deputy director of the Chinese Center for Disease Control and Prevention.

China, where Covid-19 was first detected, has moved more slowly than many Western countries to vaccinate the general public.

The Asian nation administered roughly 10 million shots between March 14 and March 20, an average of 1.43 million per day, according to Caixin calculations based on government figures. By comparison, the U.S. provided more than 3 million jabs in a single day on March 11.

Earlier this month, Zhang Wenhong, director of the infectious diseases department at Shanghai’s Huashan Hospital and one of China’s top epidemiologists, said the speed of the country’s vaccination program was a “great concern.”

Unlike inoculation drives in many developed countries, which have prioritized the elderly and vulnerable, China plans to first vaccinate groups it has identified as high priority, before moving on to those at risk of developing severe illness if infected, and finally to the general public.

The government has so far approved four coronavirus vaccines for public use, including two last month: one developed by the Wuhan Institute of Biological Products, an affiliate of state-owned China National Pharmaceutical Group Corp (Sinopharm), and one by CanSino Biologics Inc. (688185.SH).

The other two were developed separately by Sinopharm affiliate Beijing Institute of Biological Products, which was authorized last year; and by Sinovac Biotech Ltd., which won approval in February.

All of the vaccines developed in China use inactivated viruses except CanSino’s, which uses a viral vector. More than 60 countries have authorized the use of Chinese vaccines, according to state media.

China was the first country to experience a Covid-19 outbreak, but effectively stopped the virus from spreading and has recorded very low numbers of daily infections for months.

The country added (link in Chinese) seven new cases on Sunday, all of which were imported from overseas, according to the health ministry. The infections brought the total case count to 90,106, including 4,636 deaths.