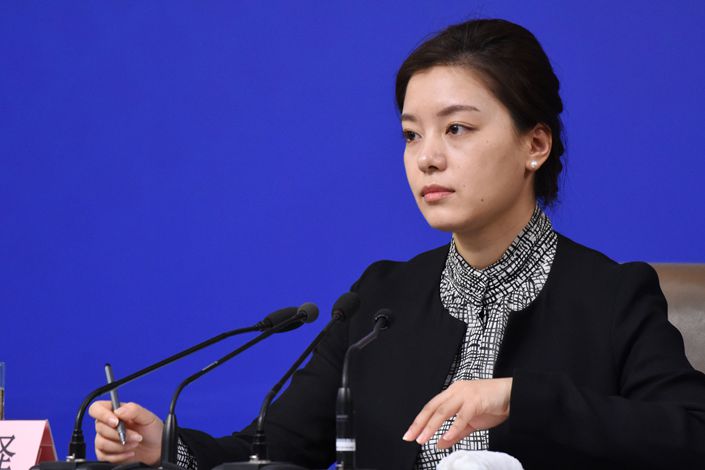 Zhang Jing, a Chinese foreign ministry English interpreter, became an instant internet hit after a video went viral showing her capable handling of the translation of a long speech on the first day of the intense China-U.S. talks in Anchorage, Alaska, on Friday.

After the two U.S. hosts’ opening remarks “from a position of strength,” 70-year-old Yang Jiechi, the Chinese Communist Party’s chief diplomat, also nicknamed “Tiger Yang” for his tough negotiation skills, launched into a 16-minute rebuttal in Chinese. He did not allow for alternating translation to punctuate his address — a rare occurrence in almost all formal diplomatic settings.

When Yang concluded his remarks, Zhang saw it as her cue to begin translation. But Yang turned to Wang, who sat on his right side, and indicated for the foreign minister say a few words.

“I’d like to translate it first,” the interpreter Zhang said to Yang.

Yang turned back from Wang and agreed: “OK, then you should translate.” Supposedly realizing his remarks were too long for Zhang, he quipped: “It’s a test for the interpreter.”

“We’re going to give the translator a raise,” Blinken quickly chipped in. “Yeah,” Yang echoed.

Everyone in the room laughed, providing a moment of relief in the tense talks.

Zhang then translated Yang’s full 16-minute remarks perfectly. State media quickly picked up on the episode in a short video and praised Zhang for her composed manner and for being exceptionally professional.

Once the video hit Chinese social media, internet users expressed adoration for Zhang almost instantly, saying she was “the most beautiful translator” with confidence and talent, and she “fully showed the elegant demeanor of China’s diplomats in the new era.”

People’s Daily, the party’s official newspaper, even found and posted a video of Zhang competing in an English-speaking competition when she was still a student at China Foreign Affairs University, an institution affiliated with China’s foreign ministry to train future diplomats.

When asked by judges during the competition about her dreams, Zhang said: “I have a dream to be a successful diplomat. I think I can also prove to the world that I am courageous and I’m talented.”

This was not the first time that Zhang had become an internet favorite. In 2013, during China’s annual political gatherings of national lawmakers and political advisors, known as the “Two Sessions,” she caught the limelight for her outstanding translation during the conference.

Because of their talent and unique access, the group of official foreign ministry translators have a long history of being at the center of key historical events in China’s foreign relations. A significant number of them have made the successful transition from translator to diplomat, and some are still actively serving on China’s diplomatic stage in this drastically changing world.

For instance, Yang, who quipped about Zhang at the Alaska meeting, started his career as a junior translator at the foreign ministry in the 1970s after his overseas study in the U.K.

In 1977, the then 27-year-old Yang was the Chinese side’s translator accompanying George H. W. Bush — head of the U.S. liaison office in Beijing in 1974-1975 and U.S. president from 1989 — on a private trip to Tibet. Since then, Yang was known to have formed a long-time personal relationship with the Bush family.

In February 1989, as head of the translator office at the foreign ministry, Yang again hosted Bush when the U.S. president officially visited Beijing and met with China’s former paramount leader, Deng Xiaoping. A photo of Yang at time, sitting behind Bush as translator for Deng, also went viral on Twitter after last week’s Alaska meeting.

Everybody knows about Yang’s career story ― he became China’s ambassador in Washington from 2000-2004 and then foreign minister from 2007-2013 before becoming director of the party’s foreign affairs commission.

Another important figure was Ji Chaozhu, who was a translator for Chairman Mao Zedong, Premier Zhou Enlai and also Deng Xiaoping. His 44 years of working as an interpreter and diplomat spanned from the early founding of the nation to the emergence of modern China.

Born in North China’s Shanxi province in 1929, Ji moved to New York with his family when he was 9 years old. In 1950, he left Harvard University and returned to the newly founded People’s Republic of China. Ji’s first-hand knowledge of American culture paved the way for him to be an indispensable member of China’s diplomatic mission.

He was a key witness to the start of China-U.S. relations. First as a translator, he stood by the side of Premier Zhou Enlai in welcoming former U.S. President Richard Nixon's arrival in Beijing in 1972. Then he was chosen by Zhou to head the first diplomatic mission to Washington in 1973.

He was Deng Xiaoping’s interpreter during the paramount leader’s visit to the U.S. in 1979, when he was praised by the New York Times as “the Indispensable Mr. Chi,” the only person from either country capable of interpreting from English to Chinese.