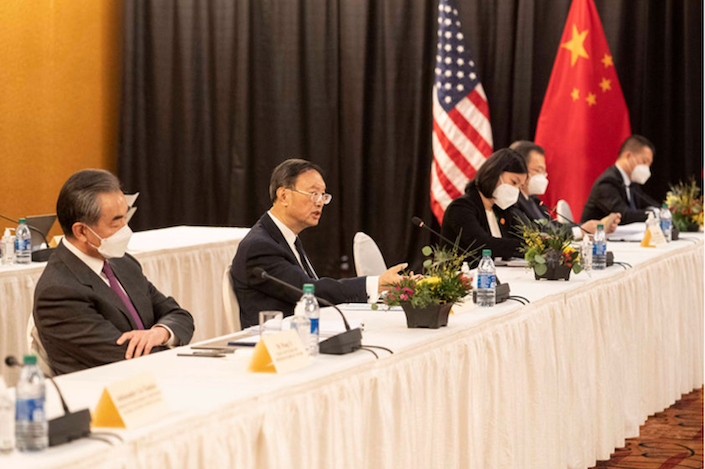 Chinese politburo member Yang Jiechi speaks to his U.S. counterparts Thursday at the opening session of the China-U.S. talks in Anchorage, Alaska, in the U.S. Photo: Liu Jie/Xinhua

China and the United States concluded their first high-level face-to-face meeting Saturday in Anchorage, Alaska, with an open show of disagreement that could raise the risk of Beijing and Washington miscalculating each other’s intentions in the ongoing rivalry between the world’s two largest economies.

Separately, the two sides identified limited areas of cooperation and coordination, such as on climate change and geopolitical issues related to Iran, North Korea and Afghanistan, while acknowledging “significant,” or “fundamental” disagreements regarding Hong Kong, Xinjiang, Tibet and Taiwan.

The tense exchange came as the two countries have been attempting to reengage after their relationship languished for the last four years under former U.S. President Donald Trump.

In his opening remarks Friday, Blinken said that the U.S. aimed to reach a “clear-eyed relationship” with China by directly raising “deep concerns with actions by China, including in Xinjiang, Hong Kong, Taiwan, cyber attacks on the United States, and economic coercion toward our allies.”

The top U.S. diplomat also said the country’s Asian allies, such as Japan and South Korea, shared Washington’s “deep concerns” toward China and expressed “deep satisfaction” that the U.S. “is back” to engage with regional allies in countering Beijing’s regional influences — a strategy that had been largely undermined by Trump.

In a blunt response, Yang, China’s highest-ranking diplomat, countered that “the United States does not have the qualification to say that it wants to speak to China from a position of strength. The U.S. side was not even qualified to say such things even 20 years or 30 years back, because this is not the way to deal with the Chinese people.”

“There is no way to strangle China,” Yang said. “Our history will show that one only ends up hurting himself if he tries to strangle or suppress the Chinese people,” Yang said. “China is firmly opposed to U.S. interference in China’s internal affairs.”

He added that “we will take firm actions in response.”

Wang echoed Yang, saying, “If the United States would indiscriminately protest and speak up for those countries just because they are your allies or partners, we believe for the long term ... it will be very difficult for international relations to develop properly.”

“So we don’t think one should be so testy as to accuse some other country of coercion,” Wang said, “Who is coercing whom?”

“The atmosphere in the meeting room was certainly not good, but it is not necessarily a bad thing,” said a Beijing-based international relations expert who requested anonymity to speak about sensitive issues.

“Throwing those disagreements in the open indicated that the two sides are being practical and realistic — this will be the new normal,” the expert told Caixin. The expert said the “new normal” could provide an opportunity for the two sides to make a serious assessment of the current risks before making any further moves.

But the expert warned that by rallying regional allies to counter China, the Biden administration’s strategy could be interpreted by Beijing as “an expansion of Trump’s anti-China policy toward a full-scale of ‘containment’ policy” adopted by the U.S. during its Cold War with the Soviet Union — which would certainly exacerbate already stressed China-U.S. relations.

Fu Ying, a former vice foreign minister, said at a China Development Forum event Saturday that China-U.S. relations have been “in a difficult period after suffering a sharp decline” and the Chines side “cannot understand or accept the erroneous acts taken by the U.S. side in recent years.”

With the conclusion of the Alaska meeting, Fu said, bilateral relations will now hinge on whether the two countries can “peacefully co-exist and resolve each other’s legitimate concerns within a single international order.”