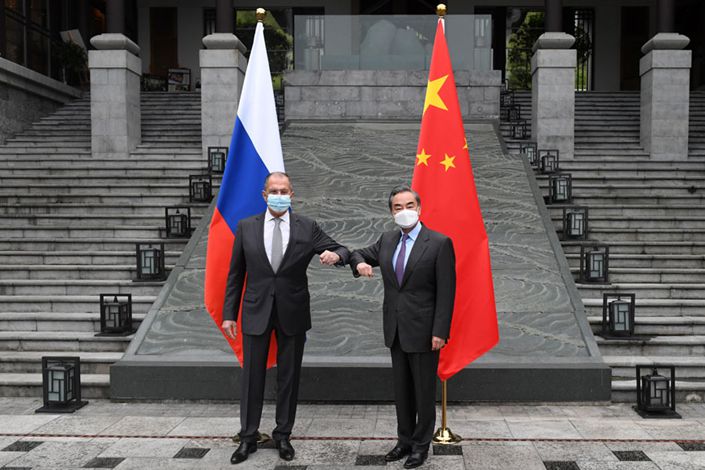 What’s new: Chinese Foreign Minister Wang Yi and his Russian counterpart Sergei Lavrov have called on the U.S. to stop “unilateral bullying,” interfering in the internal affairs of other countries, and to “stop forming small circles to seek bloc confrontation,” according to the state-run Xinhua News Agency.

At their meeting Monday in Guilin, South China’s Guangxi Zhuang autonomous region, the two foreign ministers said that U.S. should reflect on the damage it has done to global peace and development in recent years.

They also stated that all countries should follow the principles of the U.N. Charter to promote genuine multilateralism and the peaceful coexistence between countries with different social systems.

Why it matters: Lavrov’s visit to China comes just days after heated remarks were exchanged at the first high-level face-to-face meeting in Alaska between China and the new U.S. administration.

At a routine press briefing on Monday, foreign ministry spokesperson Hua Chunying said that the United States had “wantonly interfered in other country’s domestic affairs” in the past.

She stressed China and Russia’s close relationship and said that Lavrov’s visit will “bring the two countries closer in strategic collaboration on international affairs.”

This year is the 20th anniversary of the Sino-Russian Treaty of Friendship, which established the framework for economic and political cooperation between the two states. Hua said that China hopes to “carry forward the spirit of the treaty” and advance the strategic partnership between China and Russia.