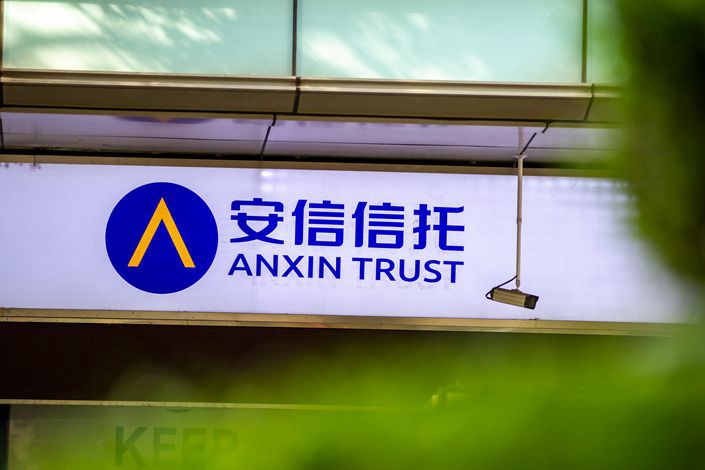 Anxin Trust was once lauded as China’s most profitable trust company. But it imploded after a 50 billion yuan financial black hole was discovered in its books. Photo: IC Photo

Anxin Trust Co. Ltd. (600816.SH), which is facing 60 lawsuits from investors seeking to recover 25 billion yuan ($3.82 billion), is taking legal action of its own against three companies who owe it money, including two with links to its boss who has been detained by police on suspicion of issuing illicit loans.

The former darling of the trust sector, which is undergoing a financial restructuring, is suing two companies for overdue debt involving about 2.9 billion yuan, according to a filing (link in Chinese) made to the Shanghai Stock Exchange on Wednesday. The two companies are related to Anxin Trust’s actual controller, Gao Tianguo, sources familiar with Anxin Trust told Caixin. Gao was detained by police in Shanghai in June last year over allegations he violated lending regulations.

In its filing, Anxin Trust said it lent 200 million yuan at an annual interest rate of 12% to Shanghai Guxin Investment Co. Ltd. (上海谷欣投资有限公司) that matured in May 2019, but the interest and principal have yet to be repaid. The Shanghai Financial Court on March 12 accepted a lawsuit filed by Anxin Trust against Shanghai Guxin, which demanded payment of the overdue loan principal, interest, fines and other fees totaling 290.8 million yuan, the filing showed.

The company also filed three lawsuits against Shanghai Huitong Zhineng Technological Co. Ltd. (上海慧瞳智能科技有限公司), including one against a Tianjin firm as well, demanding repayment of overdue loans and accounts receivable along with fines and other fees amounting to a total of 2.62 billion yuan.

Shanghai Guxin holds 100% of the equity of Shanghai Huitong and is indirectly controlled by Gao, sources have told Caixin.

Anxin Trust was once lauded as China’s most profitable trust company. But it imploded after a 50 billion yuan financial black hole was discovered in its books. Mounting defaults and the opaque nature of its operations contributed to its downfall.

The company was found to have illegally misappropriated the proceeds from trust products and created huge payment risks by guaranteeing returns to some investors, Caixin has previously reported. Anxin Trust became a platform for Gao to raise funds for his own businesses by misappropriating nearly 100 billion yuan of the proceeds of sales of trust products, several industry insiders told Caixin.

The unravelling of the complex web of loans has left Anxin Trust facing about 60 lawsuits involving some 25 billion yuan as of Wednesday, according to Caixin’s calculations.

Sources told Caixin in March 2020 that a financial restructuring plan for Anxin Trust was being finalized, but the company has not disclosed what progress has been made.

China’s trust industry plays an important role in financing by providing loans to high-risk companies and those who have difficulty getting credit from traditional banks. But it has come under closer regulatory oversight amid increasing concern over financial risks following a series of scandals. As of the end of 2020, the country’s 68 trust companies had 20.5 trillion yuan of assets under management, according to (link in Chinese) the China Trustee Association. Last month, Sichuan Trust Co. Ltd. was fined 34.9 million yuan for conducting quasi-shadow banking businesses and issuing illicit loans.

The headline in a previous version of this story incorrectly stated the value of the debt being recovered by Anxin. The correct value is 2.9 billion yuan.