Smaller Cities Reach for the Sky With New Airport Construction 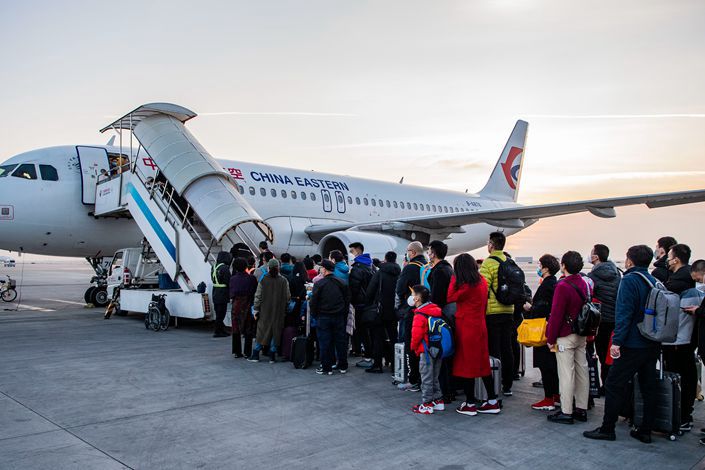 Passengers line up to board a plane at Xi'an Xianyang International Airport in Xi 'an, capital of northwest China's Shaanxi province, on Feb. 6. Photo: VCG

China is aiming to boost its overall airport capacity by nearly half in the next five years, with an emphasis on regional facilities, reflecting its focus on lifting living standards in less developed areas and building infrastructure to stimulate the economy.

The country will add 30 new civilian-use airports through 2025, bringing its total annual transport capacity to 2 billion trips, said Wang Zhiqing, deputy at the Ministry of Transport, at a briefing Wednesday. That would represent a 43% increase from last year’s level.

China has rapidly built up its civilian-use airports over the last 20 years, catering to a new generation of people who travel both for work and vacation in the modern market-oriented economy. The airport construction has coincided with a similar rapid buildup of a state-of-the-art high speed rail network.

Despite the big increase in airport construction slated for the next five years, that pace marks a sharp slowdown from the previous period. In the five years from 2015 to 2020, the country added and relocated 43 airports, taking its air transport capacity to 1.4 billion trips, according to the Civil Aviation Administration of China (CAAC).

In the previous decade, the bulk of new airport construction has focused on larger cities with the big passenger volumes needed to keep such facilities busy. But with all major cities now hosting one or sometimes even two airports, demand for such large facilities will slow in the future, said Xu Bin, head of regional infrastructure research at UBS Securities. As that happens, smaller regional airports will be the focus of the latest wave of construction projects in the aviation sector, he added.

The CAAC said earlier this month that apart from plans to upgrade airports in top-tier cities, places in less developed regions like Northwest China’s Shaanxi and Xinjiang, as well as the southwest’s Guizhou, also have expansion plans for local airports.

China has become proficient at building such infrastructure, including not only airports, but also roads, rail and power plants, to support its economic boom over the last three decades. It also often leans on such projects to stimulate the economy during slowdowns.

The country has also embarked on a major drive to export its infrastructure-building prowess to other developing nations through its Belt and Road Initiative, which includes airport construction in places like Ethiopia and Sudan.

To help improve the business performance of newer regional airports with low traffic volumes, the CAAC announced last Wednesday that it will offer subsidies for airlines that fly to such small and midsized airports with fewer than 2 million passenger trips annually. Last year, the CAAC also increased the amount of subsidies given to small airports in places with poor ground traffic.