By Lin Ting and Lu Zhenhua 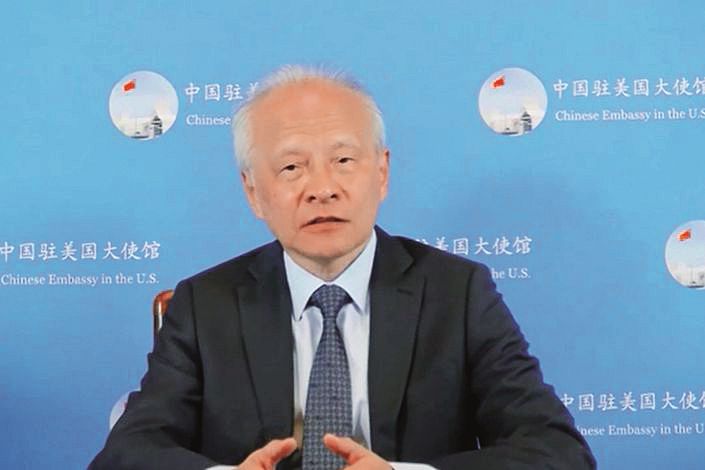 On March 25, Ambassador Cui Tiankai gave an interview to CNN in Washington. Photo: Embassy of the People's Republic of China in the United States of America

Chinese ambassador to the U.S. Cui Tiankai has rejected U.S. President Joe Biden’s characterization of China’s goal as being to replace the U.S. as the next superpower, highlighting the distrust between the world’s two largest economies over their respective strategic intentions.

“That’s not going to happen on my watch because the US is going to continue to grow,” Biden said.

When asked about the U.S. president’s comment during an interview with CNN, Cui said, “China’s development goal … is to meet the growing aspiration of the Chinese people for a better life.”

This latest spat comes despite efforts by Beijing and Washington since January to reengage after the bilateral relationship hit its lowest point under former U.S. president Donald Trump. But the two sides have clashed over issues related to Hong Kong, Xinjiang and the South China Sea in the last two months.

“Our goal is not to compete with or replace any other country. This is never our national strategy,” the Chinese ambassador said. “Hopefully, people could have a better understanding of this.”

Chinese Foreign Ministry Spokesperson Hua Chunying echoed Cui’s comments at a Friday press conference, saying, “China’s goal has never been to surpass the U.S., but to continuously surpass itself to be a better China.”

In the CNN interview, however, Cui called the Alaska talks “timely” and “helpful,” adding that he hoped the meeting will be “the beginning of a long process of dialogue, communication and hopefully coordination between the two sides.”

“We set up efforts for education and training, helping people to learn more about the law, to acquire good skills to improve their lives, find good jobs. All this has made a huge difference,” he said.

In a coordinated move, the EU, U.S., Britain and Canada on Monday slapped sanctions on a number of top Chinese officials for alleged human rights-related violations in Xinjiang.

In a tit-for-tat response, China on Monday placed sanctions on 10 EU individuals including politicians and four EU institutions. And on Friday, sanctions were expanded to nine British individuals and four entities for what China called “maliciously spreading lies and disinformation” over labor conditions in Xinjiang.

China has also hit back at the U.S. by condemning human rights violations in the country related to epidemic control, gun violence, inter-ethnic conflict, political disorder and social inequality in a wide-ranging annual report.

Last week, eight people, including six women of Asian descent and a Chinese national, were killed in a shooting spree that centered on two spas in Atlanta, Georgia. The alleged gunman was Robert Aaron Long, a 21-year-old white man from suburban Atlanta who claims the attacks were motivated by sex addiction, according to police.

“We’re very concerned, very shocked by the hate crimes against Asians in the United States,” said Cui. “We just hope the U.S. government will do everything possible to protect these Asian people.”

The Foreign Ministry also urged Washington to “severely punish” the killer as soon as possible in accordance with the law.