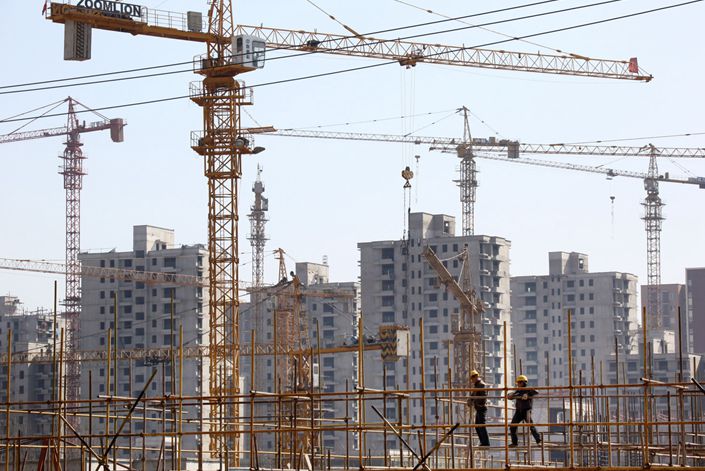 Workers labor on a construction site of a residential building

The China Banking and Insurance Regulatory Commission (CBIRC), the Ministry of Housing and Urban-Rural Development (MHURD) and the People’s Bank of China (PBOC) issued a joint statement Friday announcing a nationwide inspection of business loans, targeting borrowers illicitly using individual or corporate business loans to speculate in the housing market.

The inspection is set to be completed by May 31, said the regulators in the statement, pledging to toughen punishments on violators.

Regulators in localities including Beijing, Shenzhen and the province of Guangdong are already working to stop business loans being used to invest in real estate amid mounting risk concerns on the overheated market.

Speculators have increasingly exploited business loans originally designed to support small and midsize enterprises to fund property purchases, seeking profits amid a recent surge of housing prices in big Chinese cities as pent-up demand was released in the wake of the domestic Covid-19 epidemic.

To tap into this business, some real estate agencies offer a service where they falsify business contracts and other documents required by banks in the review process prior to issuing business loans, sources familiar with the matter told Caixin previously.

The banking regulator in Beijing said Tuesday that it had launched investigations on four banks on alleged misconduct following an inspection launched in the second half 2020 found 340 million yuan ($52 million) of individual business loans extended by local banks were misused for property speculation.

South China’s Guangdong province, where Shenzhen is located, clamped down on 277 million yuan of bank loans this month after a province-wide inspection into such behavior.

New home prices in 70 major cities, excluding state-subsidized housing, rose to the highest level in six months in February, according to the National Bureau of Statistics. CBIRC Chairman Guo Shuqing said last year that real estate is the biggest “gray rhino" threat to China’s financial system, meaning that the risk is significant but neglected.

The three central government departments said in the Friday statement that they will take a close look at banks’ business-loan issuance and encourage people to report suspicious practices. Credit ratings for companies and individuals who illegally used business loans for property speculation will be downgraded, said the regulators.

Lu Yutong contributed to this story