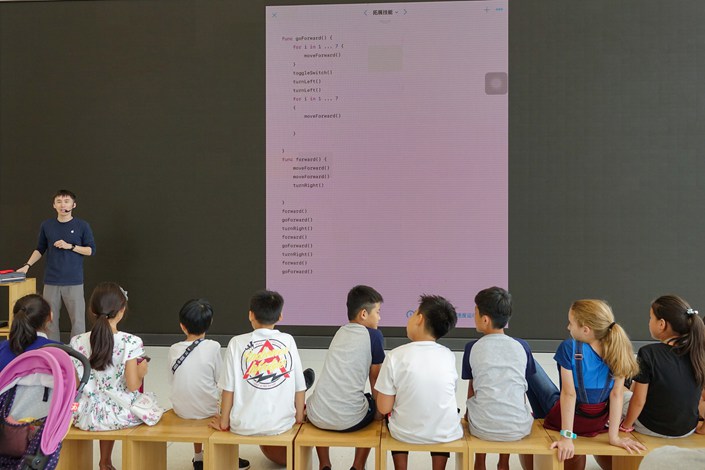 The education technology industry has been wearied by more than a year of restrictions on in-person learning due to the Covid-19 pandemic. Photo: VCG

New York’s shock $20 billion share sale went off like a firecracker next to China’s jittery edtech sector, which was already the subject of persistent rumors Beijing would clamp down on its core business.

Shares of New Oriental continued to fall in Hong Kong on Monday as North Americans slept, dropping more than 13% over the course of the day to HK$108.80. GSX Techedu had recovered a whisker in pre-market trade.

The mass sell-off turned concerns that Beijing was preparing to mount a regulatory clampdown on education technology into a panic. The industry has been wearied by more than a year of restrictions on in-person learning due to the Covid-19 pandemic.

On Saturday, China’s Ministry of Education took the rare step of issuing a statement (link in Chinese) on its official Weibo microblog rebuffing “inaccurate information” online that the government would seek to further reduce the amount of homework and extracurricular training undertaken by school-age children, a decision that would eat into edtech firms’ core business.

That seemed to reference a report circulating online Friday which appeared to describe plans to pilot a “double reduction” policy — taken to mean a decrease in the amount of homework assigned to students by both schoolteachers and extracurricular instructors.

The document said Beijing would impose new limits on the number of training institutions, such as freezing approvals of new out-of-school education firms targeting primary- and middle-school students; bringing the price of extracurricular services more in line with costs and market demand; and banning certain kinds of advertising, such as on online platforms.

The initiative would be piloted for one year in nine provincial-level cities — including Beijing, Shanghai and Guangzhou — as well as seven smaller cities, according to the document.

Industry insiders said the ministry’s denial had done little to ease their concerns. Several education company administrators said rumors of new regulation had been brewing since the beginning of March. One CEO of a Beijing-based firm said they received more than 10 phone calls per day from people in other parts of China worried about a clampdown.

“I feel as though the job I’ve done my entire life is about to become illegal,” the person said.

While increased regulation would deliver short-term pain to the industry’s major players, the industry reshuffle provoked by rumored efforts to restrain advertising and curb the number of training firms would likely have the greatest impact on small and midsized companies eyeing stock market listings, the person said.

Recent moves from other state bodies hint that Beijing is looking to tighten the runaway sector. The China Federation of Internet Societies, an organization run by the country’s cyberspace administration, set up an online education commission this month to root out illicit activities like withholding refunds from customers and employing unqualified instructors.

On March 10, online rumors that education authorities in parts of Beijing and other areas planned to continue a ban on “offline training and group activities” triggered share price slides at New Oriental and TAL of more than 10%.

Restrictions on gathering during the pandemic have hit many Chinese training firms, which typically provide online and offline services including after-school tutoring, preparatory courses for standardized tests, and college application consulting.

Taken together, the moves show the government’s aim to tidy up the industry is “gradually becoming clear,” said the head of an extracurricular training school in Beijing’s Haidian district.

Read More
In Depth: Online Learning Specialists Burning Cash as Fast as They Can Raise It

Traders worldwide are bracing for further volatility at the much-anticipated Monday opening of the U.S. stock markets, with the likelihood of further block trades potentially adding to traditional end-of-quarter unpredictability that could propel sharper swings on high-flying stocks.